Wuhan coronavirus outbreak: What can China do?

China is racing to contain the coronavirus outbreak in Wuhan as confirmed cases rise in other major cities in the country. The outbreak came amid China's Spring Festival travel rush, which begins this week, raising fears that the spread will intensify.

As of January 21, there are confirmed 291 cases in the country, with 270 reported in Hubei Province, five in Beijing, two in Shanghai, and 14 in the southern Guangdong Province. Confirmed cases have also been reported in Japan, Thailand, and the Republic of Korea.

The National Health Commission on Monday announced that pneumonia caused by novel coronavirus has been classified as a Category B infectious disease which can be quarantined at the borders, according to a notice released by the Commission.

Source of the virus remains unclear

Experts have deemed the Wuhan virus to be a new coronavirus, different from the ones that gave rise to the severe acute respiratory syndrome (SARS) epidemic in 2003 and the Middle East Respiratory Syndrome (MERS) in 2012.

The coronavirus was first reported on December 31 last year at a seafood market in Wuhan. Many of the infected individuals had come into contact with people from the city. Ninety-five percent of confirmed cases were related to Wuhan, with patients coming from or going to the city. The seafood market has been shut down for disinfection.

Although the origin of the Wuhan coronavirus is still under investigation, there is strong evidence of the disease transmitting from human to human. Zhong Nanshan, a respiratory expert now leading the panel on the outbreak for China's National Health Commission, told CGTN that two patients in Guangdong Province who were infected with the same virus had never been to Wuhan, implying that they couldn't have contracted the disease from another animal source in the city's seafood market.

"We can say now that it is certain that the virus spread from person to person," said Zhong, adding that 14 medical staff were also infected with the virus.

Comparison with the 2003 SARS outbreak

Due to the lingering memory of the SARS outbreak in 2003, there are fears that the Wuhan virus would trigger a national emergency similar to the one in 2003.

Zhong noted that even though the symptoms of the patients drew parallels, the Wuhan coronavirus is not yet as serious as SARS.

"Personally, I am confident that the situation with SARS 17 years ago will not repeat. We identified the coronavirus in two weeks and now we also have a better system of monitoring and quarantine," he said during a press conference on Monday.

The symptoms of those who contract this new virus mainly consist of fever indicative of acute respiratory infections, according to the World Health Organization (WHO). The health body also noted that infection can cause pneumonia, kidney failure and even death.

WHO recommends that people take the necessary precautions in preventing its spread by washing their hands, covering the mouth and nose when coughing and sneezing, and thoroughly cooking meat and eggs. It also suggested avoiding close contact with people who show symptoms of respiratory illness.

China has the primary role in gathering information, and the local Center for Disease Control and Prevention (CDC) and national CDC have done a very responsible job thus far, Eric Rubin, editor-in-chief of The New England Journal of Medicine, told CGTN. 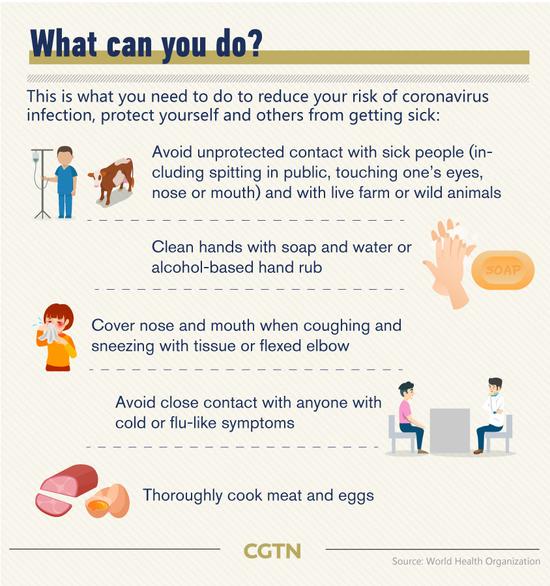