Mayor of Wuhan: Stay away 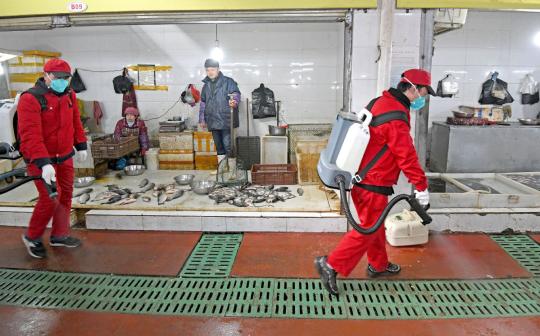 Reducing travel in and out of city may curb disease spread, he says

The mayor of Wuhan, Hubei Province, called on people not travel to and from the city in order to combat the ongoing pneumonia outbreak.

Mayor Zhou Xianwang said during an interview with CCTV on Tuesday that reducing the flow of people will also decrease the possibility of the virus spreading and lighten the pressure on disease prevention and control efforts.

Wuhan set up a prevention and control center to combat the outbreak on Monday, the city's health authorities said.

Led by Zhou, the center heads eight task forces made up of authorities involved in emergency management, publicity, transport, market regulation, medical treatment and epidemic control and prevention, according to the Health Commission of Wuhan.

The city will strengthen measures to scan passengers for higher body temperatures at airports, train and bus stations and ports, and reduce or cancel all unnecessary large gatherings.

Patients with serious symptoms should be treated by a team of medical workers with a specific plan, and hospitals should strengthen the protection of their staff to prevent infection within hospitals.

The city will promptly and objectively release information about disease prevention and control.

Traffic management authorities in Wuhan are searching vehicles entering or leaving the city for live poultry or wild animals. Health experts say animals are the likely source of the new coronavirus responsible for the disease.

All exit ports in the city have installed temperature monitoring devices, and all passengers traveling abroad will be required to undergo body temperature checks. Passengers with higher temperatures will be placed under observation or persuaded not to travel, the city's tourism authorities said on Tuesday.

All passengers with higher than normal temperatures will be registered and transferred to nearby medical facilities. They will get a full refund of their tickets and rescheduling charges, it said.

All modes of public transportation in the city have been subject to daily sterilization and ventilation since Sunday, the health commission added.

He Houpeng, deputy director of the commission, said that the government will pay for the remaining medical bills of all confirmed pneumonia patients not covered by medical insurance.

The city will delay its annual festival at the city's major tourism attractions for the upcoming Spring Festival amid the ongoing outbreak, the city's tourism authorities said on Tuesday. The bureau did not specify how long the event will be delayed.