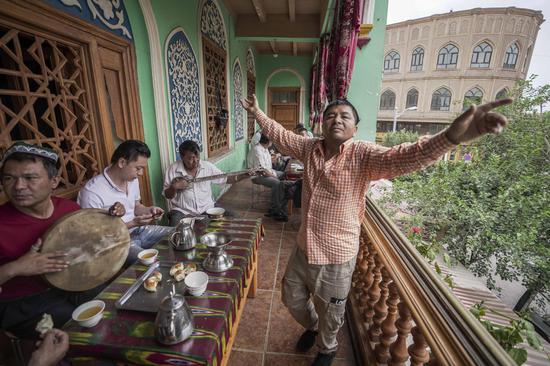 A local resident dances to the music at a tea house in the ancient city of Kashgar, northwest China's Xinjiang Uygur Autonomous Region, July 7, 2019. (Xinhua/Zhao Ge)

No terrorist incidents have occurred in Xinjiang Uygur Autonomous Region in three years, where social public security has improved significantly, a regional official said at a press conference in Beijing Monday.

The counter-terrorism and de-radicalization efforts made by the region in recent years have laid a solid foundation for the social stability and enduring peace in Xinjiang, according to Shohrat Zakir, chairman of the regional government.

In 2017, Xinjiang's GDP reached one trillion yuan (around 142 billion U.S. dollars) for the first time, while the number in the first three quarters this year rose by 6.1 percent year on year, and the region received over 200 million tourists from January to October, said Erkin Tuniyaz, vice chairman of Xinjiang.

As people of all ethnic groups in Xinjiang have learned that stability is the source of happiness while unrest a source of woes, they will spare no effort in maintaining the sustained stability of the region, Erkin Tuniyaz said.

Not any force from home or abroad will be able to undermine the resolve and determination of people in Xinjiang, he added.

Shohrat Zakir also slammed the passing of the so-called "Uyghur Human Rights Policy Act of 2019" by the U.S. House of Representatives, saying that it seriously violated international law and the basic norms governing international relations and grossly interfered in China's internal affairs.

Certain people in the United States should abandon their political bias and stop playing with double standards in terms of counter-terrorism and deradicalization issues, he said.