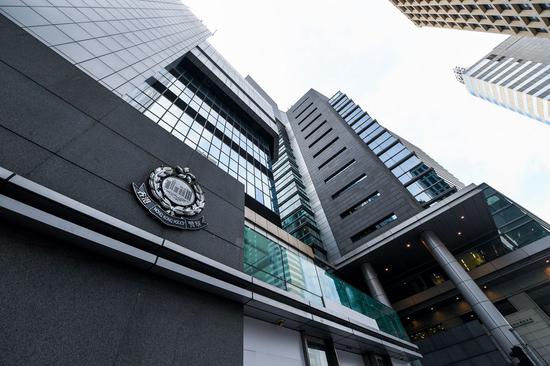 The Hong Kong police said Sunday they were investigating into a case in which a man was violently attacked when he was trying to remove roadblocks set up by protesters.

The victim, a Hong Kong resident, was hit in the head by a man with a hard object at around 1:00 a.m. local time Sunday, when he was clearing roadblocks at the junction of Nathan Road and Mong Kok Road in Kowloon, the police said.

In a video footage that went viral on social media, the victim was removing miscellaneous objects piled up on the road while a group of protesters were verbally abusing him.

As the protesters tried to surround him the victim took out his mobile phone, while a man dashed toward him and struck his head with a suspected stick or iron pipe.

The victim fainted for a while after the attack, with his head bleeding, and the surrounding onlookers continued to hurl insults at him.

The victim suffered serious head injuries and was later taken to hospital, the police said, adding that he reported his mobile phone was missing after the attack.

After initial on-site investigation, the police classified the case as wounding and theft. No arrests have been made so far.

Appealing to the public for information and clues relevant to the case, the police said they took the case seriously and strongly condemned the mob's violent acts.

Such violent attacks by rioters against those who disagree with them, or so-called "lynching," occurred repeatedly in Hong Kong in recent months, arousing public concerns and indignation.

The police reiterated that they would not tolerate anyone resorting to violence for any purpose, and would resolutely take law enforcement action to pursue all violations to the end and to restore public order.