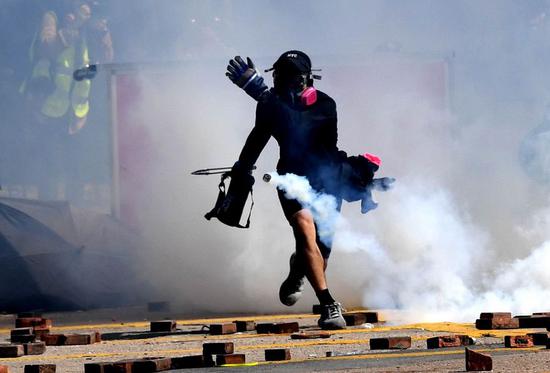 The signing of the legislation of the so-called Hong Kong Human Rights and Democracy Act of 2019 is a thinly veiled attempt to push Hong Kong closer to the abyss of chaos, and the latest proof of the willingness of some U.S. politicians to use questionable means to undermine China's sovereignty.

However, China will not be intimidated, and the United States is sure to suffer backlash from all Chinese people, including Hong Kong compatriots.

It is an abrasive intrusion in China's internal affairs and a provocation against all Chinese people, including Hong Kong compatriots, to interfere in Hong Kong affairs by adopting a domestic law.

This attempt to contain China's development by stoking chaos in Hong Kong is destined to fail. By trampling on international law and turning a blind eye to international norms, the United States is bound to be condemned by the international community.

Mass violence in the past few months has led to Hong Kong's precarious state. Those atrocities, including mutilating civilians, vandalizing shops, paralyzing traffic, sabotaging railways, setting trains on fire and terrorizing campuses, have shattered the rule of law and social order, and posed a challenge to the "one country, two systems" principle.

Due to the widespread rampage, Hong Kong's economy and the day-to-day lives of ordinary people have ground to a halt, triggering universal calls to end the violence and chaos and restore order.

But some U.S. politicians refuse to recognize these facts and insist on smearing the "one country, two systems" principle with irresponsible and unfounded claims. This rhetoric, coupled with the Hong Kong bills, will no doubt shield the perpetrators and serve as a so-called "legal basis" for interference in Hong Kong affairs.

By endorsing violent criminals and going against international law, the act is noting but a hypocritical effort to intervene in the name of promoting human rights and democracy. Such an agenda is sure to be looked down upon by the international community.

The Hong Kong bills ignore the interests of the people of Hong Kong, undermine the efforts of the special administrative region's government to curb the violence, and encourage violent criminals.

The bills go against the common and core interests of the Hong Kong people, and make those backing the bills enemies of the Chinese people.

The current situation is by no means related to human rights or democracy, but an attempt by some to overturn a lawful government and dispose of that principle. It is wishful thinking by some U.S. politicians to turn Hong Kong into a proxy in taking on China.

Hong Kong is China's Hong Kong. Hong Kong affairs are purely China's internal affairs, and are off limits to foreign intervention. No country should expect China to tolerate any such attempts. Any such schemes will be opposed by all Chinese people, including those in Hong Kong, and are destined to fail.

China, a country of 1.4 billion people and with a vast territory of 9.6 million square kilometers, will never let itself be intimidated, and its civilization has endured more than 5,000 years and will continue to endure.

No force can stop the rejuvenation of the Chinese nation. The blackmail of the United States will only serve to strengthen the patriotism of the Chinese people, and unite them.

The Chinese government has the unswerving determination to safeguard national sovereignty, security and development interests, implement the "one country, two systems" principle, and oppose any external force that aims to intervene in Hong Kong affairs.

The future and destiny of Hong Kong have always been in the hands of the Chinese people, Hong Kong compatriots included. Supported by such a conviction, Hong Kong will enjoy long-lasting prosperity and stability.

It is urged that some in Washington stop working against the will of the people as well as the momentum, and cease interfering in Hong Kong affairs, as their aspirations to smear China and poison the China-U.S. relationship will only hinder the development of bilateral ties, and bring no benefits to world peace and stability.