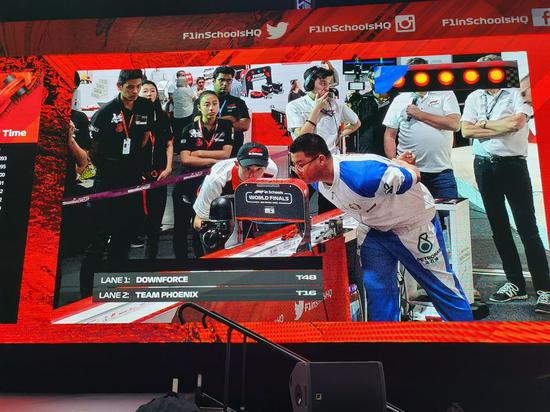 Students from China's high schools took part in the F1 in Schools World Finals 2019 in Abu Dhabi, capital of the United Arab Emirates, where they built and raced mini Formula 1 cars in the global competition.

"I'm very happy to work with such lovely teammates for our common goal," said Yu Jiamu, team manager of DownForce from the Experimental High School Attached to Beijing Normal University.

"It's a precious experience to make friends with participants from Brazil, Japan and Mexico," Yu added. The DownForce team won the Fastest Reaction Time Award in the competition.

DownForce's operation manager Zhang Zihan highlighted the unique opportunity to explore more about the unfamiliar field, through which "we have gained more confidence and optimism."

"I learned how to communicate well with others through this global competition, which is more like a feast gathering people who share the same interest," said Liu Yaxuan, operation manager of Momentum, another team also from the same high school in Beijing.

The competition featured verbal presentations, portfolio, pit display, marketing and engineering judging sessions, as well as the intense pressure of the 20-meter F1 in Schools track racing, according to the event's official website.

In May, 23 teams from some 30 middle schools in China competed in the F1 in Schools China challenge in the city of Suzhou, east China's Jiangsu Province. The top three teams, Momentum, DownForce and SPYKAR from Shanghai Shixi High School, were chosen to represent China in the world finals.