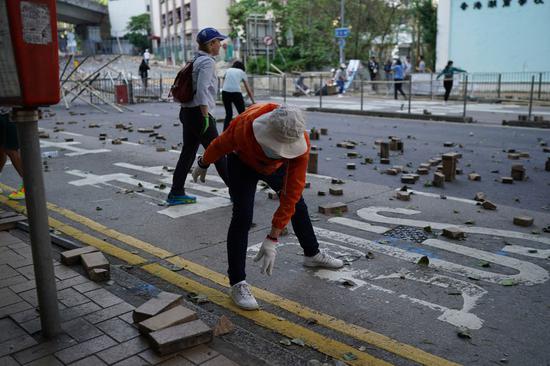 Residents clear barricades on a street outside the University of Hong Kong, Nov. 16, 2019. (Xinhua)

Despite escalating violence in Hong Kong, many residents have stepped out to clear road barricades and mourn a cleaner killed by rioters in a bid to say "no" to violence.

In multiple locations of Hong Kong in recent days, people, young and old, have gathered to clear the bricks and rocks blocking roads, and carry them away with carts.

In Mong Kok, a businesswoman surnamed Fan came out on the street with her husband. "I am doing what every Hong Kong resident should do," she said. "I do not want anybody to 'speak' for me. I just want to have the peaceful life back."

Thirty-year-old Tsang was working near the Sai Wan Ho mass transit railway (MTR) station. "The rioters made our life so inconvenient," he complained. "They are selfish and irresponsible with the unlawful and violent acts. There is nowhere in the world that people could make demand in this way!"

In Yuen Long people not only cleaned the community, but also drove away the rioters who attempted to thwart their efforts. "You are not welcome here," someone shouted.

When rioters tried to prevent doors of the MTR train from closing at the Kam Sheung Road station, some young people scolded them: "Some one died because of your conduct" and "who will feed us if we do not go to work, as you claimed?"

Unrest in Hong Kong has entered its fifth month, during which rioters' violent acts have posed great threat to people's life and safety.

A senior sanitation worker died on Thursday after being hit in the head by a brick hurled by rioters in Sheung Shui. It was the first death of an innocent civilian since the now-withdrawn ordinance amendments concerning fugitives' transfers sparked unrest.

Many people went to the site to mourn for the 70-year-old man.

"The sanitation workers clear up the mess for them every day," said a man in his 20s, who declined to be named for fear of being targeted by the rioters. "But the black-clad thugs beat him to death in cold blood. Now that he is dead, they even speak ill of him online. That is totally inhuman."

Mr. Lam, who is also a sanitation worker, felt sad for the dead. "Now our fellow colleagues are both sad and worried," he said. "Hopefully our government could end this chaos soon, and may peace return to Hong Kong."