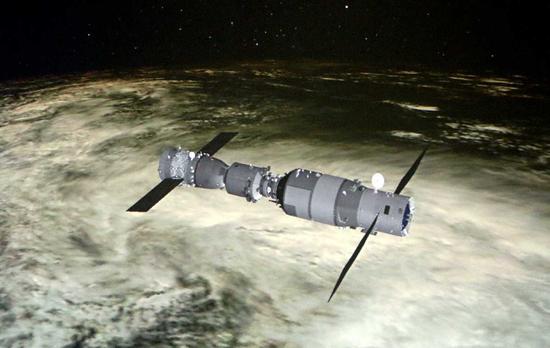 A simulator displays the successful docking of Tiangong II and the Shenzhou XI manned spacecraft on Oct 19, 2016. [Photo by Wang Juan/For China Daily]

China plans to complete the construction of a space station and have it put into operation around 2022, said Zhou Jianping, the chief designer of China's manned space program, at a forum held in south China's Guangdong Province.

The space station is designed to weigh 100 tonnes and accommodate three astronauts, which could be enlarged if needed, according to Zhou.

"The main goal of the construction of the space station is to enable China to become a country independently mastering the technology for long-term manned flight in near-Earth space, and having the capability to carry out long-term manned scientific experiments in near-Earth space and comprehensive development and utilization of space resources," said Zhou at the 4th China Summit Forum on Human Factors Engineering, which was held at Sun Yat-sen University from Saturday to Sunday.

The space station will be built as China's main platform for space science research, with the purposes of mastering the technologies in constructing and operating large space facilities, the technologies that guarantee life and health of astronauts who often fly in orbit, and the construction of a national space lab, according to Zhou.