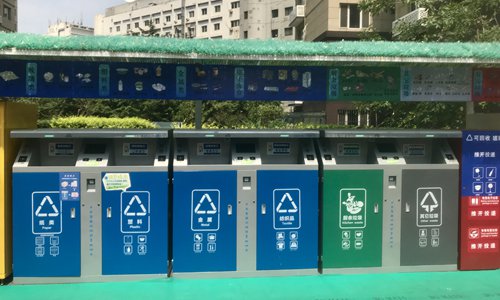 A residential community in Beijing's Xicheng district has caught public attention due to their use of intelligent technologies such as facial recognition and QR code scanning to facilitate and regulate people's garbage sorting.

Dustbins were all closed in this community and there was no unpleasant smell when a Global Times reporter stood beside them on Thursday. A camera and small screen on each trash bin can automatically recognize a resident's face and open the trash bin. Before that, residents need to scan the QR code and register via WeChat.

The automatic garbage bag vendor in the community can allow residents to   scan the QR code on it and to receive free trash bags for a month. Promoting materials for waste sorting can be seen beside the machine.

"One drop of kitchen waste can gain one point on your account, which can be used in exchange for daily necessities like eggs and shampoo every Thursday morning," a resident surnamed Liu told the Global Times.

"Waste sorting in our community has been doing really well; smart bins facilitate our dropping work as you don't need to open the bin yourself, so it is much more hygienic as well."

A community staff said the garbage sorting started in 2012. Twenty-nine sets of intelligent bins have been placed in 16 spots within the community since April.

The community has 1,900 households, and more than 1,700 have signed the agreement on garbage sorting, according to the Beijing Evening News.

Although over half of the residents have developed the habit of garbage sorting, the community requires sanitation workers to do a second sorting, a sanitation man surnamed Zhu, who has been working in the community for 12 years, told the Global Times on Thursday.

The second sorting is for collecting kitchen waste, which will be resolved by a waste decomposition machine with biological enzymes that could accelerate the liquefaction of kitchen waste and safe discharging

Reports said these smart devices have been installed in many local communities in Beijing's Dongcheng and Chaoyang districts.