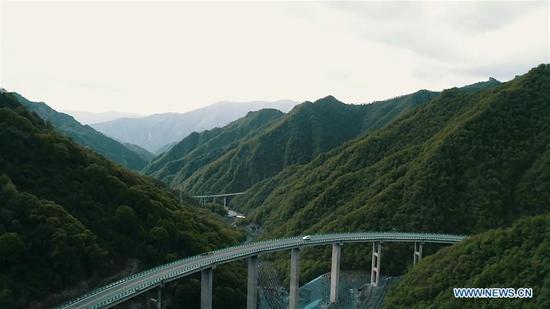 Northwest China's Qinghai Province Tuesday opened a scenic expressway after a prolonged construction aimed to minimize the impact on the forests it traverses.

Running through the Beishan National Forest Park and the Cangjiaxia Provincial Forest Park, the 50-km Zhalonggou-Nianbozhen Highway is dubbed as the "most beautiful road of Qinghai."

It took five years to complete construction, a long process considering the country's prowess in infrastructure construction, with officials saying it is required by the increasing focus on environmental protection.

"To minimize the occupation of forested lands, over half of the highway was rerouted and some sections were turned into overpasses," said Wang Jianliang, vice head of the province's highway construction and management bureau.

Officials said over 67,000 trees were spared as the highway rerouted to bypass densely forested areas, and waste construction materials were used to build 42 parking bays instead of being dumped into the environment.

Wang said environmental protection now figures prominently in Qinghai's road construction, taking up a certain portion of the budget of each project.

Qinghai, much of which lies on the Qinghai-Tibet Plateau, has in the past five years poured over 10 billion yuan (1.4 billion U.S. dollars) into ecological protection and restoration of its road and other transportation projects.