37 rescued seals being released into wild 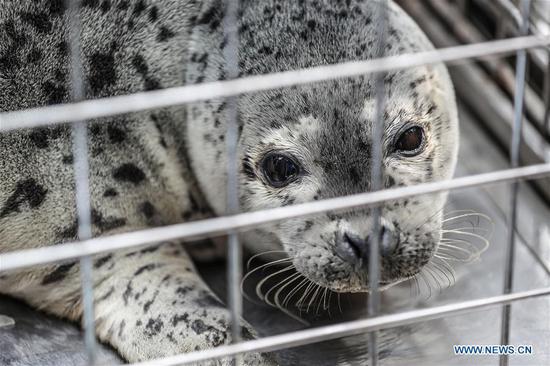 Photo taken on April 11, 2019 shows a spotted seal to be released back into the wild in Dalian, northeast China's Liaoning Province. (Xinhua/Pan Yulong)

Back in February, local police in Dalian, northeast China's Liaoning Province, busted a poaching ring involving 100 harbor seal cubs in the north part of Liaodong Bay, 39 of the animals were confirmed dead. The remaining 61 were being cared for by ambulance workers, and drugs were needed during feeding.

The first batch of 24 rescued seals were sent back to the wild in April. They were equipped with satellite transmitters in order to track how the rehabilitated animals fare once released into the wild. Among the 24 released seals, it is worth noting that one seal with tag NO. 162718 has traveled hundreds of kilometers in a month, and its route was in line with the migration direction of wild seals, showing how successful the rehabilitation is.

On Friday morning, the remaining 37 seals were successfully released into the wild in Dalian, the GPS tags installed on them will transmit location data to researchers, allowing them to track the distribution, longevity and distance traveled by the seals.

After staff opened the kennel doors, the wide-eyed, speckled seals looked around at their entourage for a few minutes before they bounced and squirmed their way into the water.

Adult male seals are a frequent target for poachers, as people believe the seals' penises are an aphrodisiac,  Tang Zailin, the head of Dalian environmental protection volunteers association told CGTN.

In recent years, seal cubs have also been poached and sold to aquariums to be trained for performance. Others are sold to restaurants to attract customers, Tang added.

According to China's Criminal Law, illegally catching precious and endangered wildlife species under special state protection can incur a sentence of up to five years. If the circumstances are considered serious, the penalty can go up to 10 years.

The harbor seal is not only a Level 2 protected national rare animal but also the mascot of Liaoning province. The protected animals usually cross the Bohai Strait in November and enter Liaodong Bay at the Bohai Sea to breed until February, then drift south, usually leaving the Bohai Sea in May.

The China Biodiversity Conservation and Green Development Foundation, an NGO that focuses on animal protection and ecological conservation, said it is necessary to prohibit the aquarium from privately purchasing harbor seals.