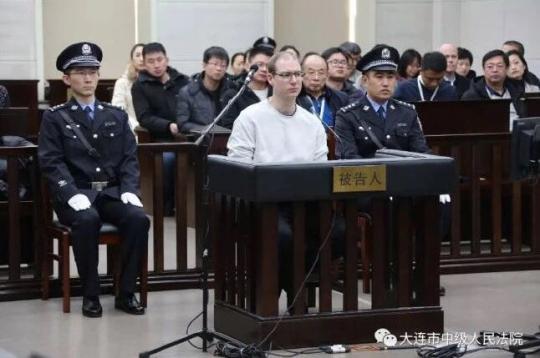 Canadian citizen Robert Lloyd Schellenberg attended a hearing in Liaoning province on Thursday to appeal his death sentence for smuggling more than 222 kilograms of illegal drugs.

The Liaoning High People's Court said in a statement that it informed the Canadian embassy in Beijing in accordance with the law and protected Schellenberg's legitimate rights during the public hearing. For example, it allowed the Canadian to hire two lawyers and arranged an interpreter.

More than 50 people, including embassy officials and deputies to the National People's Congress, witnessed the hearing, it said.

The court said its ruling would be announced at a later date.

On Jan 14, Dalian Intermediate People's Court, in Liaoning, sentenced Schellenberg to death for drug smuggling and seized his property and assets.

Previously, the same court had sentenced him to 15 years in prison for the crime.

According to January's judgment, an overseas drug dealer named Kem (translated from a statement provided by the intermediate court) asked an unidentified man to go to Dalian to rent a warehouse in October 2014, and then he called others to smuggle 222 kg of methamphetamine from Guangdong province and store it in the warehouse.

Later, Schellenberg was asked by Kem to inspect and then hide the contraband in Dalian and to later smuggle it into Australia, the judgment said.

Sensing that the authorities were aware of his plan, Schellenberg attempted to flee to Thailand on a flight from Dalian on Dec 1. He was apprehended during a stopover in Guangzhou, Guangdong province. Later, police seized over 222 kg of meth.

The intermediate court ruled that Schellenberg participated in organized transnational drug smuggling and his guilt was proved by clear facts and sufficient evidence. The court added he should be considered the ringleader because he fully participated in the crime.

Schellenberg appealed his case to the high court.

Under Chinese law, smuggling, selling, transporting and making illegal drugs can be punishable by death if the defendant participated in organized international drug smuggling or, as in this case, the amount of methamphetamine exceeded 50 grams.

If the high court upholds the death penalty, the sentence must be submitted to the Supreme People's Court, the nation's top court, for a final review before it can be carried out.