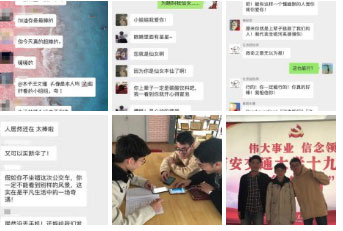 Kuakua groups on WeChat, whose members seek compliments for moral support, have become a new fad among college students in China.

A student usually posts something bad that happened in his or her life and seeks compliments from members of their group, and other students will think of every way possible to help the student who posted see the silver lining in the cloud.

"I just failed at a job interview. Need compliment," said one student in a kuakua group at Tongji University in Shanghai. "Thank God you did not end up in that lousy company," said one student. "You will find a much better job next time," said another.

"I was almost hit by a car. Need compliment," one student said. "God bless the good man," said one student. "Those who survive a disaster are bound to have good fortune," said another.

Sentiments such as these seem to be a dominant force in the use of a kuakua group.

Everything can by complimented. When one says he was dumped by his girlfriend, others will tell him all the benefits he can gain from the incident. Students even post pictures of themselves in the groups to seek compliments and others will think of all the qualities that make him or her stand out from others.

"People come to the group to seek consolation and happiness. Life can be stressful and after joking around and being complimented by others, you will feel much better," he said.

Tian Jiayin, 22, also frequently compliments others in the group.

"The group allows me to see the good qualities in myself that I often overlook and look at the bright side of everything. Kindness from strangers can help me feel much better," he said. "It is joyful to receive compliments, and giving others compliments is also very rewarding. A small compliment goes a long way."

Cao Yifei, 19, said "My friend and I also try to compliment each other in real life and we have become closer after only focusing on the good side."

Similar groups can also be found at other universities. According to Wang Jiahao, 22, there are about eight kuakua groups at Tsinghua University in Beijing, with more than 3,000 student members.