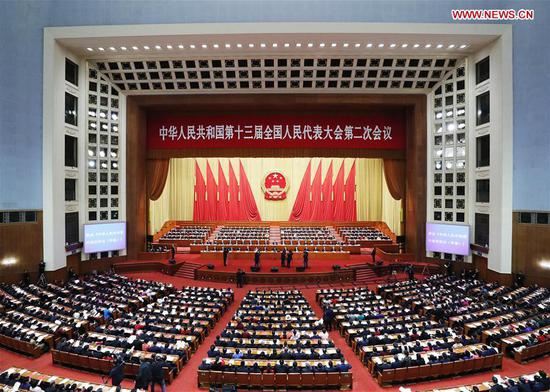 The second session of the 13th National People's Congress (NPC) holds its closing meeting at the Great Hall of the People in Beijing, capital of China, March 15, 2019. (Xinhua/Liu Bin)

Xi Jinping and other Chinese leaders including Li Keqiang, Wang Yang, Wang Huning, Zhao Leji, Han Zheng and Wang Qishan attended the closing meeting at the Great Hall of the People in Beijing.

Xi signed a presidential decree to promulgate the law.

"The newly-adopted legislation is a fundamental law in lifting China toward a new stage of high-level opening up in the new era," said top legislator Li Zhanshu when addressing the meeting Friday.

He called for in-depth study and thorough implementation of the law to promote high-quality economic development.

In addition, the legislators passed resolutions on the reports of the national economic and social development plans as well as the central and local budgets, and approved the resignation of NPC Standing Committee member Zhang Rongshun.(Updated)