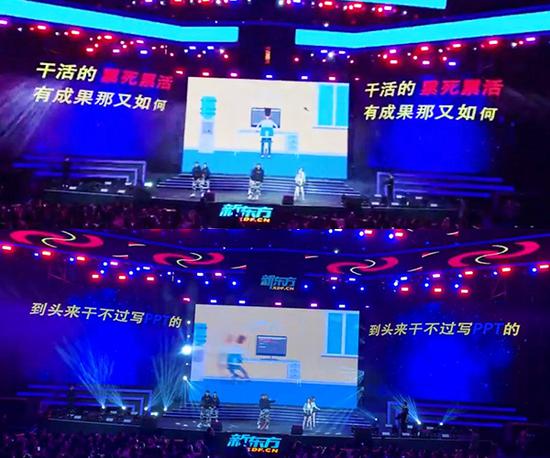 The adapted song Being Myself goes viral on the internet. (Photo/Weibo.com)

"Brown-nosers are entrusted with an important post, while plain dealers are desperate about promotion prospects."

"Giving a thumbs-up to boss's posts on social media is much more important than other agendas in the daily routine."

"Down-to-earth employees are undervalued compared with those who are good at giving presentations and writing PPTs,"

These are some of the lyrics from a song performed at the annual meeting of New Oriental, China's English-language training giant.

The six-minute video, titled Being Myself, has gone viral on Chinese social media, reflecting typical bad tendencies in company practices, which has aroused a huge response from netizens.

"The six singers are very brave to perform such a song at the company's annual meeting, especially when most high officials are sitting in the front row," said user Huo Xingxing, adding "I am afraid those employees will be fired in the near future."

Luckily, instead of being fired, the six performers attained an extra bonus for "telling the truth."

Yu Minhong, founder of New Oriental, said on his Weibo account that "it is encouraging to see employees complain about leaders."

"I have decided to reward the employees involved in the performance with 120,000 yuan ($17,779) to encourage the spirit of integrity in my company. Of course, the most important thing is to face the problems and solve them quickly," Yu added.

The song was adapted from the online hit Desert and Camel released in 2017. The original song focused on China's young generations' anxieties about life and the future.

Since the song has gone viral, discussions of "post-90s employees" have also cropped up online.

Some people think China's post-90s generation are becoming more individualistic and good at challenging authority, while others think the generation is not mature enough to be involved in the job market.

Whatever the prevailing opinion might be, it is true young Chinese enjoy more freedom of expression, career and lifestyle choices than any generation in the country's history.

According to a job-hopping survey conducted among 150,000 employees by US-based networking website LinkedIn, China's post-1995s, who have barely entered the job market, quit their jobs earlier than previous generations.

The conclusion is in line with popular sayings that spread on the internet several months ago.

The sayings, adopted from Japanese drama Ossan's Love, are roughly translated as "Don't shout to the young people at daily work, or they will resign immediately — but you can smash those middle-aged people, especially those who have cars and houses, as they will continue to work for you after criticism."