Donations of organs to be computerized 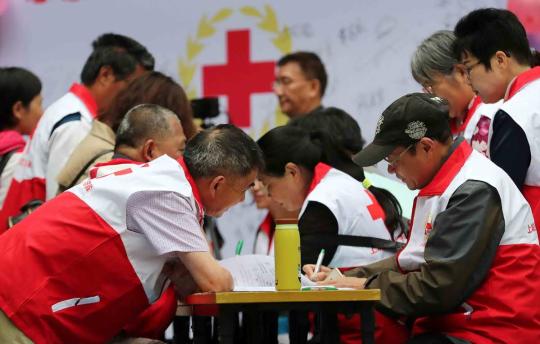 Forty-five people sign documents saying they are willing to donate their organs after death, in Hangzhou, Zhejiang province, in May. LIN YUNLONG/FOR CHINA DAILY

Fairness is central goal as humans are barred from distribution decisions

All donated organs for transplantation must be distributed through a unified computer platform to ensure fair and transparent distribution and traceability, under a regulation released on Monday by the National Health Commission.

The regulation, which takes effect on March 1, bans any organization or individual from distributing donated organs on their own.

Hospitals where transplant surgeries are performed should enter the information of all patients waiting for transplants into the China Organ Transplant Response System and keep it updated, the regulation said.

Organ procurement organizations should get in touch with hospitals promptly after the system has sent notifications of available organs to make sure the information was received.

Hospitals that have received notices should log on to the system within 30 minutes to check information regarding the organs and their donors, and reply within an hour whether to accept the organs for transplant.

The hospitals should notify the procurement organizations immediately if they cannot do the transplant surgery after having received the organs. In that case, the organs will be redistributed.

The transplant response system, supervised by health authorities at the provincial level or above, can automatically match donated organs with potential recipients and distribute organs based on defined principles, including urgency. Human input is removed to ensure fairness and transparency, Wang Haibo, who is in charge of the system, said in an earlier statement.

Like many other countries, China's shortage of donated organs is a severe problem in the organ transplantation field. Every year about 300,000 patients with terminal diseases need transplants, but only about 20,000 surgeries can be done, Huang Jiefu, former vice-minister of health, said in an earlier interview.

Organ donations in China have increased rapidly since 2015, when the authorities banned the use of organs retrieved from executed prisoners. That made voluntary donations the only legitimate source of organs. China has now become the second-largest country in number of annual organ transplant surgeries, next to the United States, according to the National Health Commission.

As of the end of last year, the number of people who donated organs after death exceeded 21,000 in China, with more than 58,000 organs donated, the commission said.

Chen Xinguo, director of the organ transplant center at the Armed Police Force General Hospital, said that in practice all organs used for transplant surgeries at the hospital are acquired through the electronic transplant response system.

Although the system ensures fair and transparent distribution of donated organs, some problems remain, such as uneven quality of organs procured from different geographical areas, and the system's slow response time, which can hamper the process, he said.

"Previously major transplant centers would communicate with organ procurement organizations before the arrival of organs to ensure the organs are of high quality and can be used," he said. "We hope all organs distributed are up to standard. Otherwise, substandard organs will cost lives and no doctor will use them."

Now that distribution of organs through the China organ transplant response system is mandatory, it is necessary to constantly improve the system so it responds faster and hospitals can get the donated organs as soon as possible to prevent waste, Chen said.