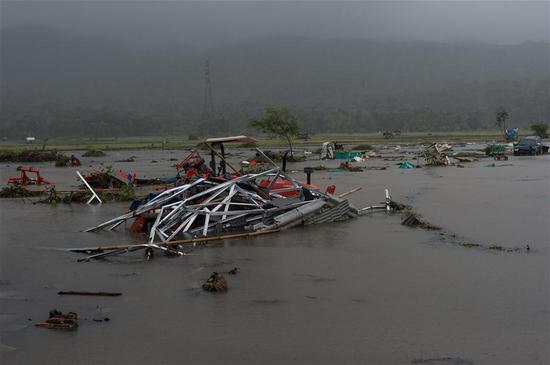 The death toll from a volcano-triggered tsunami in Indonesia rose to 222 with at least 843 others injured, the disaster management agency said on Sunday.

The tsunami hit at 9:27 p.m. Jakarta time (1427 GMT) on Saturday, after the eruption of the Anak Krakatau volcano, or Child of Krakatoa volcano in English, sparked underwater landslides, leading to the rise of the sea level, according to the agency.

Heavy machinery equipment has been deployed in the catastrophe-hit areas to help with search and rescue operation, said Sutopo.

Many residents and tourists were forced to flee, but the spokesman did not give specific numbers, saying that evacuation centers are being set up.

"The figures are looked to rise as the recurrent risk assessment has not reached all affected areas," he told a press conference on Sunday.

"When the tragedy occurred, many people were spending their time along the coastal areas of Pandeglang," he added.

Thirty-three bodies were recovered in Pandeglang district alone, with 491 others injured and 409 houses and hotels damaged, said Sutopo.

The water submerged the area with a height of four to five meters, leaving scores of people missing, head of emergency department of disaster management agency in the district Endang Permana said.

"Many people were missing, they were swept by waves when they were watching a performance in coastal area," Permana told Xinhua over phone.

In Lampung Selatan district, rescue of those trapped under the rubble and search for the missing are underway, said Ketut Sukerta, head of disaster management agency in the district.

"Over 100 buildings were collapsed. We are now attempting to rescue the people trapped under the rubble and to find those swept by the waves," he told Xinhua by phone from Lampung Selatan district.

"We are ready for deployment of more personnel and equipment to recover and rescue the affected people," head of communication for media of national search and rescue office Yusuf Latief told Xinhua over phone.

The volcano eruption triggered landslides at the sea bed that led to the tsunami, which was emboldened by the effect of full moon, head of the meteorology and geophysics agency Dwikorita Karnawati said.

"We predicted that the impact could be directly or indirectly. There was a possibility of landslides under the sea bed," she told a press conference on Sunday.

The meteorology and geophysics agency has banned the community from having activities in the coastal area of the strait, as investigation is underway on the risks of the volcano eruption, said Sutopo.

Meanwhile, the Chinese embassy in Indonesia has not received any casualty report on Chinese nationals so far, according to a notice issued by the embassy on Sunday.

Over 170,000 people were killed in Aceh province of northern tip of Sumatra Island of Indonesia on December 26, 2004 as an Indian Ocean tsunami, which was triggered by a strong quake, killed more than 226,000 people in a dozen of countries along the Indian Ocean.

The Anak Krakatau is the island that appeared in 1927 and has kept growing since then. The Anak Krakatau volcano is one of the 129 active volcanoes in Indonesia, a vast archipelagic nation home to 17,500 islands and sits on a vulnerable quake-hit zone so called "the Pacific Ring of Fire."