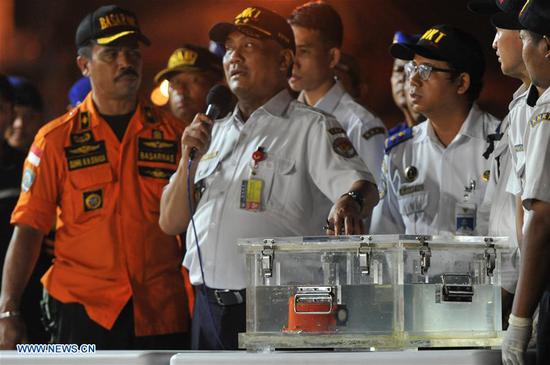 Search teams on Thursday discovered a black box, the landing gear, and more wreckages of the Indonesian Lion Air plane that crashed into the sea off western Indonesia on Monday.

"Based on initial information, yes, it (black box) has been found," spokesman of the Transport Ministry Baitul Ihwan told Xinhua via phone.

Senior investigator of the Indonesian National Transportation Safety Committee (KNKT) Ony Soerjo Wibowo told a press conference later in the day that it was still uncertain whether the black box recovered was the flight data recorder (FDR) or the cockpit voice recorder (CDR).

Efforts were underway to search for the other black box, but the mission was hampered by strong underwater current.

The Boeing 737 Max 8 jet en route to the city of Pangkal Pinang with 189 people onboard was reported missing Monday morning, and was believed to have crashed 13 minutes after taking off from Jakarta's Soekarno-Hatta international airport.

It is believed that all 189 people onboard the plane have been killed.

Head of Indonesia's National Search and Rescue Agency (Basarnas) Muhammad Syaugi said Thursday evening that a landing gear, several "victims" and other larger parts of the crashed aircraft, including some parts of the fuselage, were also found by the remotely operated underwater vehicle on the seabed.

"There are several victims whom we have seen. There were also a landing gear. It was two wheel and an axle, and an edge part of the body of the plane," he told a press conference.

Some 50 divers were involved in the search mission on the sea floor, about 500 meters northwest of the location where the pilot of the JT 610 flight last communicated with the air traffic control.

KNKT Chairman Soerjanto Tjahjono said the visit of 16 officials from Boeing and NTSB was aimed at assisting Indonesia in carrying out investigation into the crash of the brand new plane.

"We are yet to have sufficient knowledge about the new plane nor trainings related to new features and technology of the brand new plane model," Soerjanto said.

The single-aisle, twin-engine passenger jet was manufactured this year and was put into operation in mid-August, according to the low-cost airline.

The new model has a bigger body than other 737 planes, and is said to be equipped with more advanced engines and other advanced equipment.

Lion Air ordered as many as 218 units of the Boeing 737 Max 8 for its fleet, making it the first in Indonesia to operate the plane, which made its factory maiden flight in 2017.