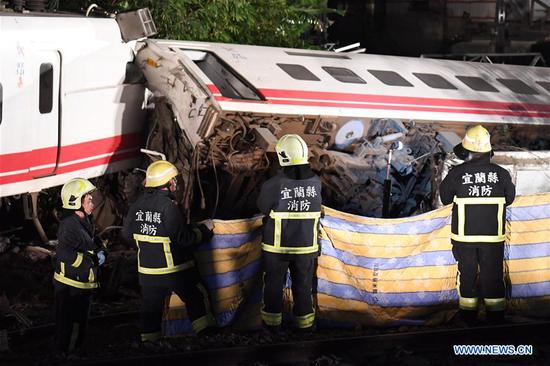 A preliminary investigation showed that speeding was the cause to Taiwan's worst train disaster in decades, which claimed 18 lives and left nearly 200 people injured Sunday.

An official in charge of the investigation said Monday evening that the express train was going too fast when it entered a section of a curved track, before it ran off tracks in Xinma Station, Yilan County. The radius of the curved rails is about 300 meters with a designated turning speed of 75 kph, but the train was running over 80 kph, and perhaps even over 100 kph when the accident happened.

The cause of the speeding, however, still awaits further investigation, the official said.

Local procuratorial authority in Yilan has filed a case to the local court for detaining the driver, identified by surname as You, on suspicion of causing deaths by negligence.

The Puyuma Express No. 6432 bound for Taitung from Shulin Station with 366 passengers on board derailed at 4:50 p.m. Sunday afternoon in Yilan, leaving 18 people killed and 190 people injured. It was considered Taiwan's worst train crash in more than three decades.

According to local media reports, the driver and the conductor reported brake faults and problems with the power system before the accident happened.

Mainland authorities on Monday mourned victims who died in the accident and sent condolences to their families and the injured.

Two female passengers from the mainland were found injured in the derailment. One of them, aged 44 and surnamed Yao, was still in critical condition.

The island's railway authority is carrying out full safety checks into its Puyuma express trains and related infrastructure.

By Monday morning the wreckage has been cleared and train services on the line were partially resumed.