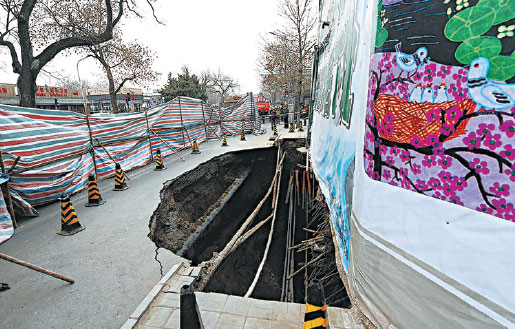 This photo taken on Jan 24, 2015 shows a big hole on a street in Beijing's Xicheng district. The hole has since been filled in with 1,400 cubic meters of concrete. (Photo by Xu Xiaofan / for China Daily)

A former lawmaker faces nearly seven million yuan in penalties from civil claims made by institutions involved in rescue operation, street offices and affected companies when his illegally excavated basement caved in and caused a road and surrounding buildings to collapse in Beijing in 2015, Beijing Youth Daily reported.

In 2014, Li Baojun, a former lawmaker from East China's Jiangsu province, hired an unlicensed contractor to dig an 18-meter-deep basement in his courtyard in Xicheng district without getting prior permission.

When the structure supporting his basement collapsed on Jan 24, 2015, the road and houses nearby were damaged, causing direct economic losses of more than 5.83 million yuan (about $900,000).

After Li was put in prison, many institutions filed civil claims for compensation.

State Grid Beijing Electric Power Company said the collapse damaged power lines and caused power outages. The restoration work cost the company more than 860,000 yuan and the expenditure should be paid by Li, the company argued. A court ruled Li and Lu must pay more than 700,000 yuan.

The Beijing city lighting management center said the collapse damaged the company's street lamps and it cost 103,000 yuan to repair them. A court ruled Li and Lu pay 103,000 yuan.

A person surnamed Wang rented his excavator to Lu, but the excavator was buried when the cave-in happened. Li and Lu were ordered to pay 220,000 yuan to Wang.

The Shichahai street office filed two civil claims against Li. One was for rescue and consolidation work for surrounding houses, costing 1.08 million yuan. The other was for temporally acommodating affected households, costing 2.13 million yuan. A court supported the office's claims and ruled Li to pay 3.21 million yuan.