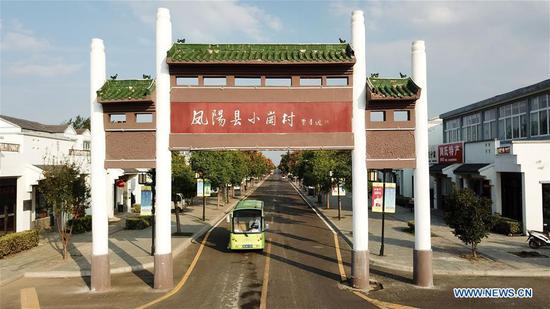 Imagine breaking your back working on a farm from dusk to dawn but still struggling to put food on the table. Imagine living in such abject poverty that in non-harvest season the only way to feed your family is to beg for food and money.

This was the harsh reality of Xiaogang village in East China's Anhui province just four decades ago.

Fast forward to today and Xiaogang looks more like a town than a village.

The transformation owes a lot to 18 farmers who dared to take an unthinkable step. Back in 1978, the village was so poor that residents survived by eating whatever they could get their hands on, including boiling poplar leaves and eating them with salt, or grinding roasted tree bark into powder to use as flour.

After every harvest season, they begged for food and money in the countryside.

It was this desperation that forced the 18 villagers to come together and sign a secret agreement to divide the communally owned farmland into individual plots under what were called household contracts. They agreed to fulfill government and commune grain quotas, while keeping any extra for themselves.

Before the villagers decided to risk everything by signing the agreement in 1978, the grain output of the village was 15 metric tons a year. One year later, the output rose sixfold to 90 tons.

And these changes have created openings that were once unthinkable. The farmers are now selling their products directly to customers via e-commerce. They are leasing land to big agribusiness and food companies. Panpan Foods Investment, a major consumer products company based in Fujian province, is building a factory in the village thanks to the easy availability of farm goods and government support.

Whether it is e-commerce or farming, Xiaogang, the pioneer of rural reforms, is all set to kick start new economic growth. And to preserve its epoch-making past, the village has a modern-looking museum that not only provides a detailed look at the historic event, but also displays all the information in both Chinese and English. The house where the document was signed is well preserved and showcases the village life of that era beautifully.

A lot has changed in the past 40 years in the village, but what has not changed is the original fighting spirit of Xiaogang. Just like the past generation, today's generation is as determined to make the impossible possible.