Quake warning system to be in place by 2023 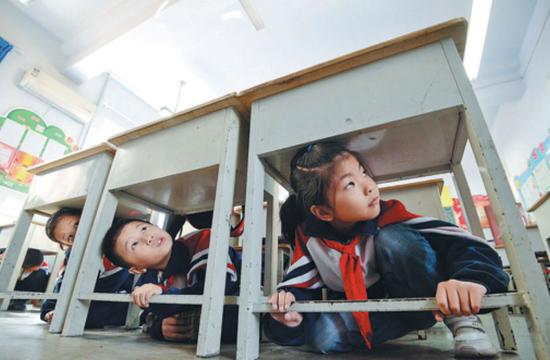 It has already finished testing an earthquake alert system for high-speed trains, and the system is expected to be extended to the country's entire high-speed rail network, said Zheng Guoguang, vice-minister of emergency management. He made the remarks ahead of the International Day for Disaster Reduction, which falls on Saturday this year.

The early warning system, known as the National Seismic Intensity Rapid Reporting and Early Warning project, was approved by central authorities early last year. It will include more than 15,000 observation stations across the country, at a cost of almost 1.9 billion yuan ($274 million), and 3,360 service terminals in national and provincial government bodies that are related to earthquake relief, as well as in public institutions and vital infrastructure and utilities, such as nuclear power plants.

Observation stations will be set in different areas according to earthquake frequency and the potential risk of and effects from disasters. The North-South Seismic Belt, which encircles most of Sichuan, Gansu and Yunnan provinces, will be one of the key areas for such stations, said Zheng, who also is head of the China Earthquake Administration.

Seismic sensors could detect the first energy that emerges from a quake before the jolt begins. This makes it possible to warn those in affected areas before they feel the impact. The farther people are from the epicenter, the longer they would have to respond in the event of a quake.

Even before the system won approval, the administration teamed up in 2012 with the Ministry of Railways, which has since been reshuffled into China Railway Corp, to establish a team to research an earthquake alert system for high-speed railway.

The system developed by the team has been tested on several railway lines in Fujian and Shanxi provinces and works very well, Zheng said, adding that his administration will continue to cooperate with China Railway to extend the system to all high-speed trains in the country.

The completion of the field test of the alert system on the Datong-Xi'an high-speed railway in August marks the quake alert system's shift from the research and development stage to actual use, the administration said.

Zheng said the system will probably be put into operation first in Southwest China, considering the high frequency of earthquakes there. For example, the Sichuan-Tibet railway, which is under construction, crosses four earthquake faults where 14 earthquakes above magnitude 7.0 have occurred.

Zheng said one challenge that China faces in earthquake alerts is the particular nature of earthquakes in the country. Most earthquake epicenters around the world occur along tectonic plate boundaries, many of which are located in the ocean. In China, however, most tremor epicenters occur within the plate on which the country sits, he said. Such countries as Japan and Mexico usually have more time to alert people to a quake, since it takes time for a quake originating in the ocean to affect land, Zheng added.

In addition to earthquake early warning, China also has been trying to forecast quakes, which is much more difficult, Zheng said.

"The Chinese government is the only one in the world that considers earthquake forecast research as its duty," he said.

China is among the countries that suffer the most from earthquakes. From 1900 to 2017, China was hit by an annual average of 18 earthquakes above magnitude 5.0. So far this year, the number stands at 10.