Company's use of red scarf draws ire of CYL 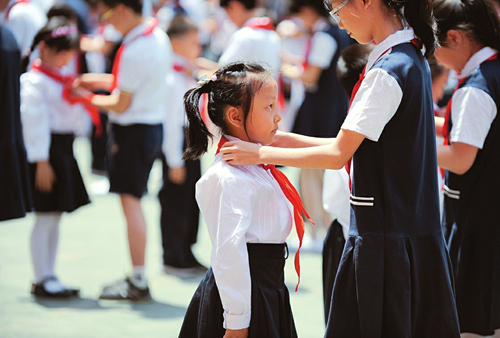 A student from sixth grade adjusts a red scarf on a first grade student at Shanxi Experimental Primary School, Taiyuan, May 31. More than 400 students in first grade put on red scarves for the day –– a symbol of them joining the Young Pioneers of China movement, as part of the upcoming International Children’s Day on June 1. (Photo/Shanxi Daily)

The Chinese Young Pioneers National Working Commission strongly condemned the behavior of a company that used a red scarf, the symbol of the young pioneers, for marketing purposes, according to a statement released by the Central Committee of the Communist Youth League on Thursday.

The actress wore a red scarf when participating the activity on Aug 1.

The red scarf is a neckerchief worn by the Chinese Young Pioneers. The red triangle scarf represents a corner of the red flag and symbolizes the revolutionary tradition.

Founded in 1949 and led by the Communist Party of China, the Chinese Young Pioneers is a national organization for Chinese children aged 6 to 14, most of whom are primary or secondary school students.