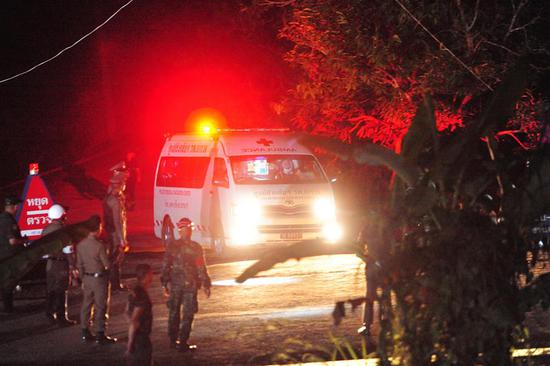 An ambulance taking the eighth rescued boy moves to a local hospital in Chiang Rai, Thailand, July 9, 2018. Eight boys have been saved and emerged by Monday evening from a flooded cave where 12 boys and their soccer coach were trapped for more than two weeks. (Xinhua/Rachen Sageamsak)

The eighth boy emerged Monday evening from a flooded cave where 12 boys and their soccer coach were trapped for more than two weeks, a witness told Xinhua.

Roaring helicopters are seen overhead in the media center near the cave.

The rescue operation for the football team resumed at about 11:00 a.m. local time on Monday after a break to replenish oxygen supplies and make other preparations deep inside the cave complex.

Four boys were extracted from the cave on Sunday night.

Thirteen foreign divers and five members of Thailand's elite navy SEAL unit on Sunday made up the main team diving the boys to safety through narrow, submerged passageways that claimed the life of a former Thai navy diver on Friday.

The 12 boys, aged between 11 and 16, and their coach have been trapped in the cave since June 23. They were found when the search, joined by more than 1,000 rescuers, entered the ninth day.