Take a leap: China has a national toilet system online 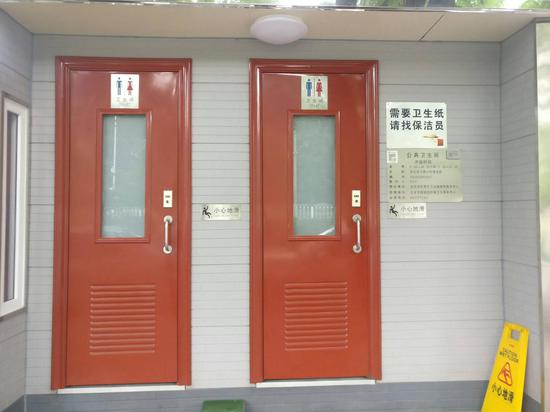 That previously unspeakable experience gets juiced up with modern tech as shown at one model refurbished public toilet in west Beijing.

An application that not only locates the nearest public convenience but also tells how clean, spacious and accessible it is, is now available on app stores and the WeChat platform.

Facial recognition is employed so people can get their tissue ration with a show of their faces. Authorities say this helps to make sure tissue paper is not overused and cuts down costs.

The toilet has detectors to ensure the place smells fine.

It also has rooms that parents and children can use at the same time.

Such model toilets will pop up and replace all old, unsavory ones across the country in time.

Moreover, the same national system that directs the user to the right toilets also monitors the condition of public toilets.

"This is the first time we're collecting information for the country's public toilets on this scale," said Kuang Shihuan, the developer with the national toilet cloud platform.

"The information, from where the toilets are to how well they function, will not only help people look for one when they need it, but also help those who manage them, better tend and mend the facilities."

For example, big data from the use of public toilets show women need at least 50 percent more stalls than men.

And that's become a new standard for public toilet design.

Yang Hongyi, a director with the Sanitation Facility Division of the Ministry of Housing and Urban-Rural Development, told CGTN that much more had been done in the last few months.

"We are also promoting 'the third toilets,' asking places that have extra room to share toilet spaces when the area needs it," Yang added.

"We want to add a human touch to the entire process for the 'toilet revolution,' which is a small thing that means a lot to people's well-being."

"The new toilet is good. I've been here a few times. It's clean, it's convenient. It's almost as good as my private one at home," one user told CGTN.