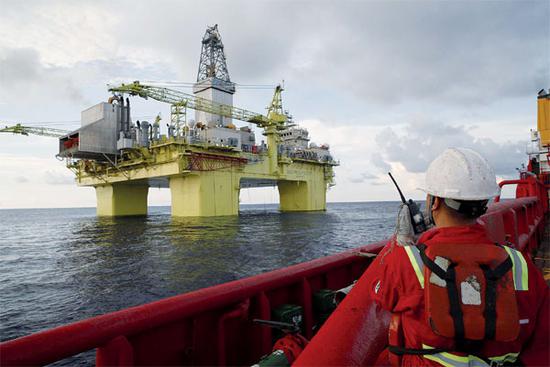 A worker checks one of CNOOC's deep-water drilling platforms in the South China Sea. (Photo/Xinhua)

This is the latest move by CNOOC, which is strengthening its presence in the area, after it formed a partnership with Australia-based Roc Oil Co and British Virgin Islands-registered Smart Oil Investment to jointly develop oil blocks in the South China Sea.

The company also signed a similar agreement in May with Canada's Husky Energy, after putting 38 offshore blocks up for bidding to seek overseas partners for joint development, the most in recent years.

Li said oil companies in China had revived production this year as oil prices recover following three years of decline. Crude prices climbed above $70 a barrel in 2018 after falling as low as $30 in early 2016. The company's deepwater drilling rig CNOOC 981 discovered Lingshui 17-2 in September 2014, which has an average operational depth of 1,500 meters below the sea surface, according to CNOOC.

According to CNOOC, China has mastered the design, construction and installation technology for semi-submersible production platforms to be used in volatile conditions in the South China Sea, it said.

The South China Sea has strong winds and cold temperatures, while constant moisture from storms and mist from the high winds make the region one of the most demanding of all offshore oil and gas exploration territories, along with the North Sea and the Gulf of Mexico, according to Li Yanjun, an engineer with CNOOC's Zhanjiang branch.

According to the Ministry of Land and Resources, nearly 15 trillion metric tons of natural gas lie in the high-temperature and high-pressure gas fields of the South China Sea, one-third of the total in the region.

However, Li from ICIS China said in addition to a sufficient supply of gas resources, what is as important is that the most significant contributor to the gas shortage is the limited capacity of distributed gas storage infrastructure.

China's imports of gas currently account for more than 30 percent of domestic consumption, and the figure is expected to continue growing, she said.