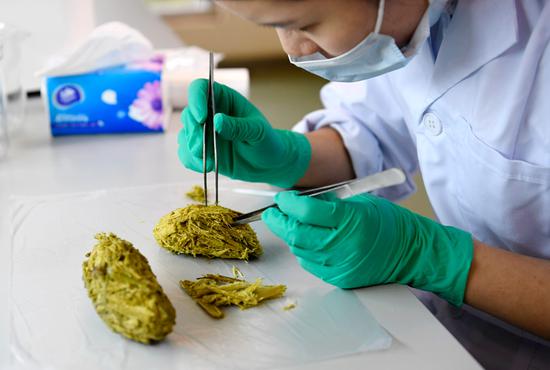 A researcher extracts DNA from the feces of a giant panda. (PHOTO/CHINA NEWS SERVICE)

A national-level laboratory has been established to guarantee strong technological backup for the protection of pandas as well as other rare animals at Giant Panda National Park in Southwest China.

The first State-level lab dedicated to panda conservation and research, the lab was established at the Dujiangyan base of the China Conservation and Research Center for the Giant Panda in Sichuan province.

An inauguration ceremony for the Key Laboratory on Conservation Biology of Rare Animals at the park was held on Tuesday.

Zhang Hemin, deputy director of the laboratory, said the lab is necessary as the park encompasses an area with some of the most complex terrain and abundant wildlife in the world.

Covering 27,134 square kilometers, the park is three times the size of Yellowstone National Park in the United States.

It is expected to help wild pandas isolated on six mountains across the three provinces of Sichuan, Shaanxi and Gansu to reconnect, thus strengthening their gene pool.

The park is also home to nearly 1,300 species of vertebrates. Among them, 145 species are under State-level protection, such as the snub-nosed monkey in Sichuan and the snow leopard, said Zhang, who is also chief executive of the conservation and research center.

"A national key laboratory is needed to study the species and provide suggestions on how to protect them better on the basis of scientific research."

The conservation and research center has 270 captive pandas, accounting for nearly 60 percent of the total captive pandas in the world. It has built ties for scientific cooperation with 15 zoos and 10 universities in 13 countries.