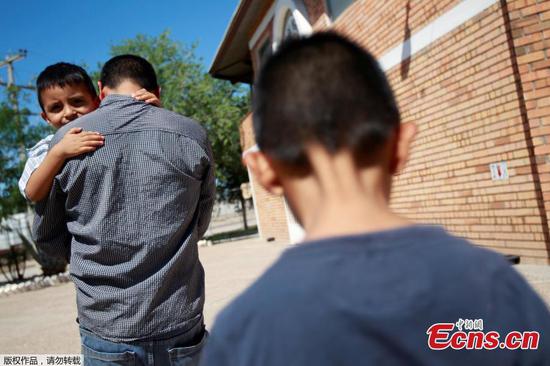 Salvadoran migrant Epigmenio Centeno carries his three-year old son Steven Atonay, as his nine-year son old Axel Jaret follows, outside the shelter House of the Migrant, after Epigmenio decided to stay with his children in Mexico due to U.S. President Donald Trump's policy that separates immigrant children from their parents, in Ciudad Juarez, Mexico June 19, 2018.(Photo/Agencies)

The move comes as the practice, as a result of the Trump administration's "zero tolerance" policy against illegal immigration, has aroused outrage and sharp criticism from both home and abroad in recent days, denounced as cruel, inhuman.

Trump's order, drafted by Homeland Security Secretary Kirstjen Nielsen, directs her department to keep families together after they are detained for illegal border-crossing.

Speaking from the Oval Office at the White House, Trump said that he "didn't like the sight or the feeling" of the divided families.

His executive order would keep most families together during the process of prosecution and deportation at the border, except in cases where an adult may pose a threat to a child. Families will also be prioritized in the adjudication process.

It also directs other agencies, including the Pentagon, to take steps to find places to house family units. Defense Secretary Jim Mattis said his department will "respond if requested" to house detained migrants.

But the president said the "zero tolerance" policy, under which every adult caught crossing the border illegally will be detained and prosecuted, will continue.

"We're signing an executive order. I consider it to be a very important executive order. It's about keeping families together, while at the same time being sure we have a very powerful, very strong border," Trump said.

Heart-rending images and sounds of wailing children separated from their guardians have led to a firestorm of opposition to the Trump administration's crackdown on illegal immigration.

Pressure also grew Tuesday night after Trump administration officials have reportedly been sending babies and other young children forcibly separated from their parents at U.S.-Mexico border to at least three "tender age" shelters in South Texas.

According to government figures, more than 2,300 minors separated from their families after illegally crossing the U.S. southern border with Mexico from May 5 through June 9.

The president had claimed that the crisis of family separations could not be resolved by an executive order and insisted that previous administrations, Democrats and Congress were to blame for the situation.

Democrats have said that the situation is Trump's fault, and accused him of using the children as leverage to force them to negotiate on immigration and the president's long-promised border wall.

International organizations, human rights groups, and several countries have condemned the practice of family separations. Some Republicans have also joined Democrats in expressing concerns over it.

According to a White House official, U.S. first lady Melania Trump "has been making her opinion known" to her husband that he needs to do whatever he can to keep families of migrants together.

Experts argue though Trump is seeking to galvanize his base with hardline law enforcement on immigration, moves like forcing family separations could backfire and hurt Republican candidates' chances in November's midterm elections.

"Separating mothers from small children is not a winning issue for him," Brookings Institution Senior Fellow Darrell West told Xinhua.

Trump announced his intent to sign the order at the White House earlier in the day, but reiterated his hardline stance on immigration and border security.

"We're keeping families together but we have to keep our borders strong," Trump said. "We still have to maintain toughness or our country will be overrun by people, by crime, by all of the things that we don't stand for and that we don't want."

"The border is just as tough," he said as he signed the executive order.

In a statement, the president of the organization, Richard Cohen, said indiscriminate enforcement is "shattering" communities across the country.

Trump also said Wednesday that he will "be doing something that's somewhat preemptive but ultimately will be matched by legislation," as lawmakers are struggling to find common ground on legislative solutions to family separations.

The president met House Republicans on Tuesday discuss immigration legislation, with the family separation policy as a central topic.

In a surprise move, Trump suggested that he would postpone a picnic for U.S. lawmakers and their families at the White House scheduled for Thursday while they sort out the immigration issue.

"We want to see if we can solve it, so we're cancelling or postponing the congressional picnic tomorrow," Trump said.

House Speaker Paul Ryan said Wednesday that the chamber will vote on immigration legislation on Thursday that would end family separations, but the chances of its passing are unclear.