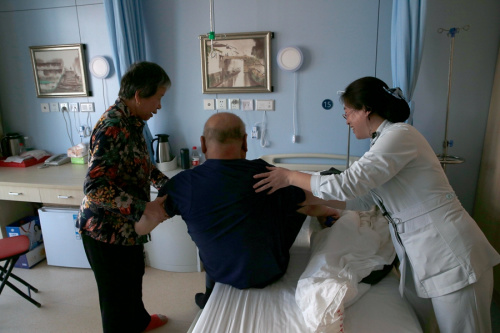 A nurse helps a patient to sit up at Peking University Shougang Hospital in Beijing. (Photo for China Daily)

Since it opened in March last year, China's first hospice for people with terminal cancer has provided professional care and a relatively peaceful end to life for about 100 patients.

Affiliated to Peking University Shougang Hospital in Beijing, the hospice serves as a "tribute" to the dignity of human life, even in the final stages, and the laws of nature, said Gu Jin, the founder who is also head of the hospital.

The veteran cancer surgeon urged more public awareness and support for end-stage patients, who are often subjected to unnecessary treatments and have to endure the resultant pain.

In such cases, quality hospice care is far more useful than costly, but redundant, medical procedures, he said.

"Hospice care helps patients who have little time left, and also reduces the financial burden on their families."

In China, the lion's share of medical resources devoted to cancer are invested in diagnosis and treatment. That means leading public hospitals lack the incentive to provide hospice care, which is labor intensive and less profitable than treatment.

The Shougang hospice employs four doctors and 10 nurses, which is barely sufficient to meet demand.

According to Gu, each patient spends one month on average in the hospice, but 20 to 30 new names are added to its waiting list every month.

In general, hospice care involves procedures such as pain relief and psychological counseling to help provide a respectful end to life with as little suffering as possible.

The risk of contracting cancer rises as people grow older. That means China's rapidly aging population may pose an increased risk of a cancer epidemic in the years to come.

In many big cities, where life spans are generally longer, cancer is the leading cause of death among people with illnesses.

Moreover, in Beijing, the disease accounts for 26.8 percent of all deaths, according to the city's health authority. "The number is still rising in Beijing and across the country with the growing 'gray population'," Gu said.

To be better prepared to cope with the rising demand for hospice services, Gu urged the government to formulate more support policies and provide financial support to train and provide more high-quality care givers.