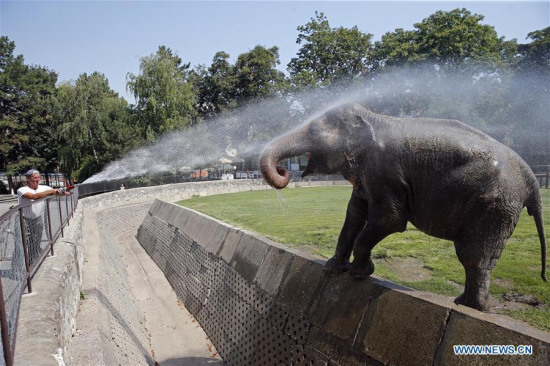 A zoo worker sprays water to a female elephant to cool her down in Belgrade zoo, Serbia, on Aug. 5, 2017. (Xinhua/Predrag Milosavljevic)

Last year was the hottest year on record without a warming El Nino event, according to reports published Thursday by multiple agencies, revealing a clear signal of continuing, human-caused climate change on our planet.

The U.S. space agency NASA found 2017 to be the second warmest since modern recordkeeping began in 1880, while the U.S. National Oceanic and Atmospheric Administration (NOAA), which conducted a separate, independent analysis, ranked it as the third warmest.

Scientists at NOAA found that the average temperature across global land and ocean surfaces during 2017 was 0.84 degrees Celsius above the 20th century average. This was the third highest among all years in the 1880-2017 record, behind the warmest 2016 and the second warmest 2015.

An analysis from the World Meteorological Organization (WMO), which confirmed 2017 was among the top three warmest years on record, showed that the global average surface temperature in 2017 was approximately 1.1 degrees Celsius above the pre-industrial era.

"The annual change from year to year can bounce up and down, there is year to year variability, but the long term trends are very clear, especially since the mid-21th century," Deke Arndt, chief of the global monitoring branch of NOAA's National Centers for Environmental Information, told reporters during a media teleconference.

"The overall picture is very, very similar and coherent," echoed Gavin Schmidt, director of NASA's Goddard Institute for Space Studies during the same teleconference. "We are in a long-term warming trend."

Overall, the five warmest years on record all have taken place since 2010, NASA and NOAA said.

If "the effects of the recent El Nino and La Nina patterns were statistically removed from the record, 2017 would have been the warmest year on record," they said.

Martin Siegert, co-director of the Grantham Institute at Imperial College London, called the fact that 2017 is the warmest non- El Nino year "unsurprising but deeply concerning."

"Despite our best efforts so far, global warming continues apace," Siegert said. "Forget what the sceptics will tell you, climate change is real and is happening right now ... This is yet another wake-up call -- to develop a zero carbon sustainable economy before it's too late."

Experts believed that global warming is closely tied to more intense or frequent extreme events such as storms and droughts, which are now at historical high levels across the world.

In the U.S. alone, last year was officially declared the "costliest" with losses from hurricanes, fires and freezes reaching a record 306 billion U.S. dollars. The United States had 16 weather and climate disasters in 2017 each with losses exceeding one billion dollars, another NOVA report said earlier this month.

"Temperatures tell only a small part of the story," WMO Secretary-General Petteri Taalas said in a statement. "The warmth in 2017 was accompanied by extreme weather in many countries around the world. The United States of America had its most expensive year ever in terms of weather and climate disasters, whilst other countries saw their development slowed or reversed by tropical cyclones, floods and drought."

Bob Ward, policy and communications director at the Grantham Research Institute on Climate Change and the Environment at the London School of Economics and Political Science, said in a statement that all countries are exposed to the growing impacts of climate change.

"This year governments are due to start the process of assessing the size of the gap between their collective ambitions for reducing greenhouse gas emissions and the goals of the Paris Agreement," Ward said.

"The record temperature should focus the minds of world leaders, including President (Donald) Trump, on the scale and urgency of the risks that people, rich and poor, face around the world from climate change."