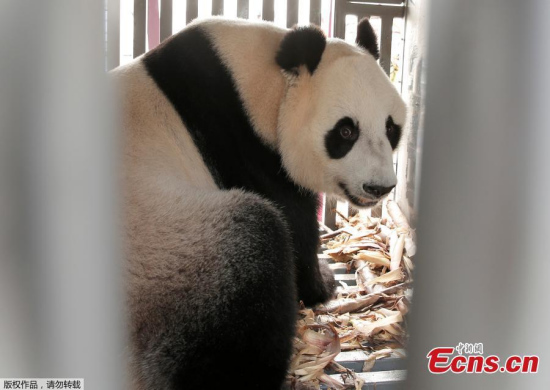 A giant panda on a 10-year loan from China is seen during a welcoming ceremony at Soekarno Hatta airport in Tangerang, Indonesia, September 28, 2017. (Photo/Agencies)

A giant panda pair from China arrived in Indonesian capital Jakarta Thursday on a 10-year joint research lease, making Indonesia one of the 16 countries and regions to host and help breed the endangered bear species.

The seven-year-olds landed at Jakarta's international airport at around 9:00 by a flight of Indonesia's main flagship carrier Garuda Indonesia from the panda breeding and research base in China's southwestern city of Chengdu.

Cai Tao, a male bear weighing 127 kg and female bear Hu Chun, weighing 120 kg, will be transferred to a 4,800-square-meter panda park at Taman Safari zoo, located 75 km south of Jakarta and 1,700 m above sea level to ensure that the pandas are at a similar altitude to their hometown.

The pandas will be available for public viewing a month later after the quarantine period.

After a long air trip accompanied by both Chinese and Indonesian panda keepers and veterinarians, Cai Tao and Hu Chun were greeted warmly by Charge d'Affaires of Chinese Embassy in Indonesia Sun Weide, Indonesian Environment and Forestry Minister Siti Nurbaya, as well as hundreds of journalists.

It is a great honor for Indonesia to receive a couple of giant panda and become one of the 16 countries and regions in the world to have panda as a breeding loan, Siti said.

Siti thanked China for supporting the wildlife conservation in Indonesia, saying the people of Indonesia will have the same pride to have pandas here.

A panda mania has hit the vast archipelago country when the arrival date of the couple was announced last week as Indonesians will see the cuddly animal near home rather than taking a long trip abroad.

Putri Rosmalia, a journalist from Indonesia's Media Indonesia newspaper told Xinhua that she has been expecting the pandas for years, and wish to know more and write more stories about pandas.

She said she wants to say "wish you two enjoy the stay in Indonesia and have baby pandas soon" to Cai Tai and Hu Chun if they could understand Indonesian language.

Beny, an airport cargo handler anticipating the ceremony, told Xinhua that he is very proud to see panda for real, and will bring his family to visit them once the panda park is open.

The furry ambassadors, regarded by the Chinese as national treasures, are adored worldwide as envoys for friendship and symbol of peace.

"The arrival highlights the deep friendship between China and Indonesia and helps re-invigorate our friendly exchanges and bilateral relationship," Sun said at the Airport.

"This marks yet another historical moment in our bilateral relationship."

Talks regarding the pandas were initiated in 2010 when China and Indonesia celebrated the 60th anniversary of the diplomatic ties.

A memorandum of understanding was signed by representatives of the China Wildlife Conservation Association and Taman Safari Indonesia on Aug. 1 last year in Guiyang, China.

"The cooperation of this conservation will enrich Indonesia's world wildlife collection and is expected to become one of the symbols of the diplomatic relations between China and Indonesia," Siti said.