Putting one foot in front of the other is an increasingly popular pastime, and a healthy one, especially in major metropolises－which is why Beijing authorities are keen to keep the trend going.

The city's Tourism Development Commission has unveiled plans to more than triple the number of walking and jogging trails over the next five years as part of an effort to create a greener environment and encourage physical fitness.

As a bonus, avid travelers often say, the best way to explore a city is on foot.

The city already has trails stretching a combined 1,300 kilometers in 11 districts and counties, mostly in and around scenic spots. Now, work has begun on adding another 2,000 km, including at places such as Yanqi Lake, sections of the Great Wall and venues for the 2022 Winter Olympics. 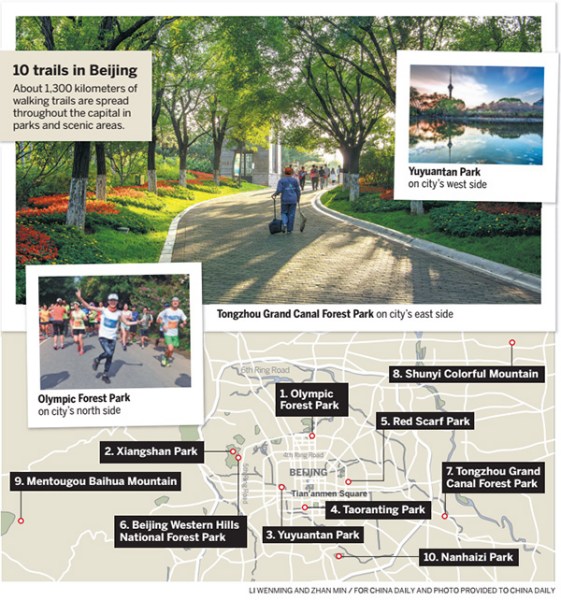 "Trails offer multiple benefits," Song Yu, director of the commission, said in announcing the plans. "People not only get new ways to exercise, but these walkways also connect many scenic spots with traditional villages. This helps develop rural tourism and provides a way to increase the incomes of residents."

In economic terms, combining fitness activities with tourism is a gold mine. As disposable incomes in China have increased, the demand for sporting goods and services, as well as health products such as dietary supplements, have boomed.

"Over the past 10 years, I've been to most provinces in China to climb mountains, and I've hiked a lot overseas－in Nepal and India," said Ding Xiaozhe, a Beijing accountant who estimates he spends about 40 percent of his income on leisure actitivies.

"When I'm home, I go running three times a week," he said. "It's all time and money well spent on my health."

And that's the goal for Beijing. Walking trails are not primarily about making money, they're about averting a health crisis.

According to a report by the Chinese Center for Disease Control and Prevention, 11.9 percent of the country's population is already obese, which in China is having a body mass index of 30 or more. Beijing tops the scale with 25.9 percent.