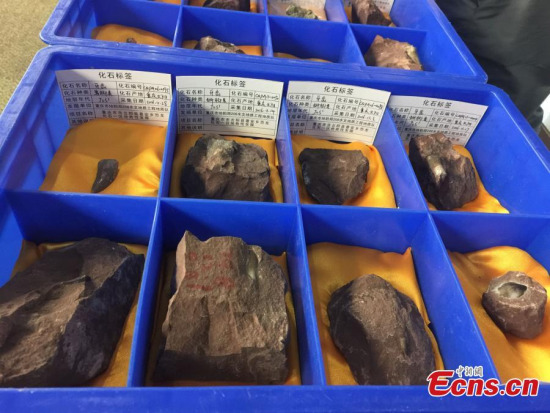 Dinosaur fossils on display in Chongqing Municipality. The dinosaur fossils are from at least five species and concentrated in a wall 150 meters long, 2 meters deep and 8 meters tall, close to a branch of the Yangtze River. An expert said the findings in Pu’an helps research into the evolution of dinosaurs. (Photo: China News Service/Liu Xianglin)

Chinese paleontologists have discovered a large fossil site in southwest China's Chongqing city, according to a press conference held Wednesday by the city government.

More than 5,000 fossils have been excavated from a "fossil wall" in Pu'an Township, Yunyang County, since October last year, just a year after the site was spotted by a local farmer.

It is estimated that a large number of dinosaur fossils are buried at least 20 meters underground.

The unearthed fossils belong to at least five dinosaur categories, such as ornithopods, sauropods and stegosaurs, and date back to the Jurassic period, according to researcher Xu Xing with the Institute of Vertebrate Paleontology and Paleoanthropology of the Chinese Academy of Sciences.

Many fossils at Pu'an belong to the middle Jurassic period and dinosaur fossils from that time are scarce worldwide, Xu said.

"The Jurassic 'wall' at Pu'an is the largest in the world," Xu said.

The Chongqing government has earmarked more than 17 million yuan (2.5 million U.S. dollars) for protection and excavation of the site.