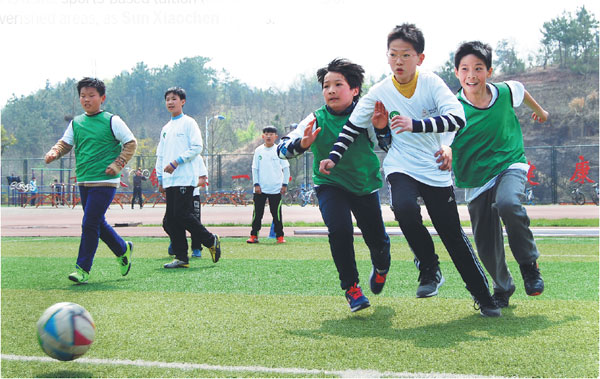 Zhuo Yi loves kicking a beverage can around the rural neighborhood near his home, pretending he is dribbling a soccer ball past defenders one after another. It's been the sixth-grader's favorite outdoor activity since he first watched a televised game by chance at a village grocery store in 2013.

"I was fascinated by the action right away, so for fun I started kicking anything I could find - from stones and clods of mud to plastic bottles - because my father couldn't afford to buy me a ball," said the 12-year-old student at Siyuan Experimental School in Jinzhai county, western Anhui province, who comes from an impoverished family.

Despite the poverty that has plagued the county, hidden in the barren mountains, since the 1980s, the deep interest in the game shown by Zhuo and his underprivileged peers has been kept alive thanks to a charitable program provided by the Real Madrid Foundation, the charitable arm of the one of the world's wealthiest clubs.

In 2015, with the support of the Foundation for the Next Generation, managed by the China National Committee for the Wellbeing of Youth, the foundation selected the Siyuan school as the first venue in China for its "socio-sporting" soccer academy. The initiative offers tailor-made training programs integrated with the school's physical education curriculum.

The school, which was built in the county's new central area in 2013, has 3,850 students,and more than 1,200 from grades two through eight have taken part in, or are participating in, the program, which features weekly 90-minute training sessions conducted by Real Madrid-trained PE teachers, according to school principal Sun Yexu.

"The program is turning what used to be a soccer wilderness into a hotbed where the game is being embraced by children and parents, not only as healthy exercise but as a tool for all-around education," Sun said.

The foundation operates 264 such facilities in 71 countries and regions around the world, promoting the values inherent in soccer and the sport's educational function.

China is rolling out an ambitious plan to build 20,000 schools specializing in soccer education by 2020 to nurse talent for future success at the FIFA World Cup. However, the pilot program at the Siyuan school has been tasked with cultivating fully-rounded individuals, not elite athletes, through teamwork, discipline and improved communication.

"It's not about developing future players for Real Madrid or China at all," said Wu Youwen, CEO of Real Madrid Asia Pacific.

"I have seen firsthand that the youngsters enjoy it and learn a lot by playing soccer, and they forget their problems in their day-to-day lives. This is what fills us with hope on top of this program."

Despite the growing recognition of all-around education among parents in China's urban regions, the idea of teaching children by allowing them to play sports still sounds too progressive for some in Jinzhai, especially as providing children with adequate food and clothing remains an issue.

"For a lot of parents here, classroom study all day long and enough homework after school are legitimate proof of a good education," said Yang Hengyu, a full-time PE teacher recruited by the school when it was founded.He has now been joined by seven more dedicated PE teachers, some of whom work part time.

"No blame is attached to the parents, because the cognition for more advanced education can only be realized with the improvement of living standards," he said.

Hampered by a poor transportation infrastructure that left roads impassable, and a lack of commercial crops on the barren highlands, Jinzhai, a former important Red Army revolutionary base, is one of the poorest rural settlements in Anhui, East China.