Reforms are a shot in the arm for capital's healthcare system 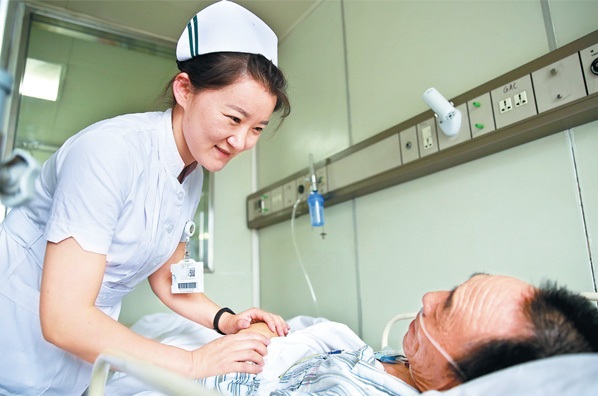 A nurse at the China-Japan Friendship Hospital cares for an inpatient. (Photo/Feng Yongbin)

Beijing will put a new medical care reform plan into effect on Saturday, which will bring an end to medicine price markups, according to local officials.

More than 3,600 medical institutions are involved in the reform and all of them will abolish the medicine price markups, according to Fang Laiying, head of the Beijing Municipal Commission of Health and Family Planning.

It is estimated that the cost of treatment per outpatient will be reduced by about 5 percent on average thanks to cuts in medicine prices, while there will be an average cost increase of 2.5 percent for inpatient treatment due to the growth of certain service charges, according to Fang.

Community hospitals and medical institutions will be given the same access to the medicines usually prescribed in higher-level hospitals, so that patients will have more choices, Fang said.

Marking up medicine prices is a practice that has been adopted by most public hospitals in China since the 1950s. It allows hospitals to sell drugs with markups usually at a rate of 15 percent above the drugs' tag prices.

Its purpose was to make up for the shortage in healthcare funding from the government, and it became part of doctors' salaries, creating incentive for doctors to over-prescribe.

In 2015, incomes from checkups, tests and medical treatment materials accounted for about 66 percent of the city's medical services revenue, while the incomes from the intelligence and labor of medical personnel, such as diagnosis, surgery, treatment and nursing, which are closely related to the quality of medical services, only accounted for 34 percent, according to Fang.

"The core of this new reform is to separate the functions of medical services and drug sales so as to shut down the markup mechanism in public medical institutions in Beijing," Fang said.

"The separation will cut off the channel for making money through over-prescription and help medical practitioners provide better treatments and other services," Fang said.

"The reform will effectively motivate the medical staff to pay more attention to the medical service they are providing, and further improve the doctor-patient relationship," said Li Ruifeng, a medical reform expert from Beijing University of Chinese Medicine.