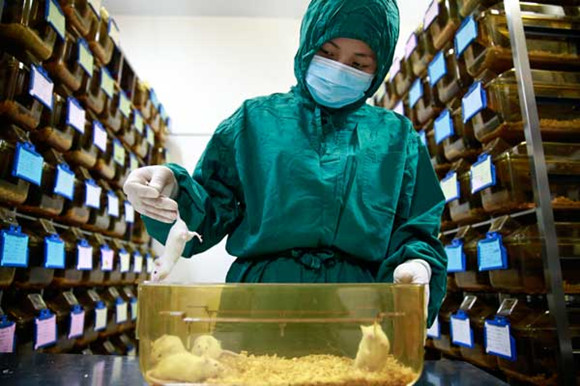 A researcher checks the conditions of rats used for laboratory tests at the National Institute of Biological Sciences in Beijing. （Photos：China Daily/Feng Yongbing and Xinhua/ Liu Dawei）

Leading experts are working on a revision to a national regulation on the management of laboratory animals, which, if adopted, is expected to greatly improve the management and protection of the animals.

A draft of the new rules includes changes to the Regulation on the Management of Laboratory Animals, which was adopted in 1988, according to Sun Deming, chairman of the Welfare and Ethics Committee of the Chinese Association for Laboratory Animal Sciences, also known as CALAS, who is helping to formulate the new rules.

However, a number of areas of dispute still exist, according to Sun, who declined to provide further details such as when the new regulations, being overseen by the Ministry of Science and Technology, will come into force.

The Regulation on the Management of Laboratory Animals, a major guideline on the management of animals used in scientific testing, has been revised several times since it was enacted. It is primarily intended to ensure that animals used in laboratory experiments are of sufficiently high quality, in terms of health, to meet the demands of scientific research.

The regulation also includes a number of articles related to the animals' welfare, such as stipulations that the scientists conducting the experiments must "take good care of the animals and do not provoke or abuse them".

Other guidelines have also been introduced since 1988, including many related to the welfare of laboratory animals, such as conducting experiments on euthanized animals to minimize pain, providing the results of the experiments will not be affected.

In June 2014, the China Food and Drug Administration issued guidelines to allow domestic producers to market commonly used cosmetics, such as shampoos and perfumes, without the need for animal testing.

However, China still lags behind many countries in legislation to promote the welfare of laboratory animals, according to Yue Bingfei, director of the experimental animals division at the National Institutes for Food and Drug Control.

Although China has made great progress in the management of laboratory animals in recent years, a lack of laws and regulations has been a major obstacle to the prevention of violations, and has also reduced Chinese scientists' opportunities for international exchanges, Yue said.

About 20 million animals, mainly mice, are used in tests in China every year, he added.

The ministry said other animals, including rabbits, guinea pigs, dogs and monkeys, are also used.

According to Sun, from CALAS, the rapid development of biomedicine has resulted in large numbers of animals being used in a wide range of experiments, and their welfare is attracting increased attention from the public and animal rights groups.

"China should accelerate improvements to the legislation and management systems to regulate and maintain the interests of researchers and laboratory animals, and promote the sustainable development of animal welfare," he said. 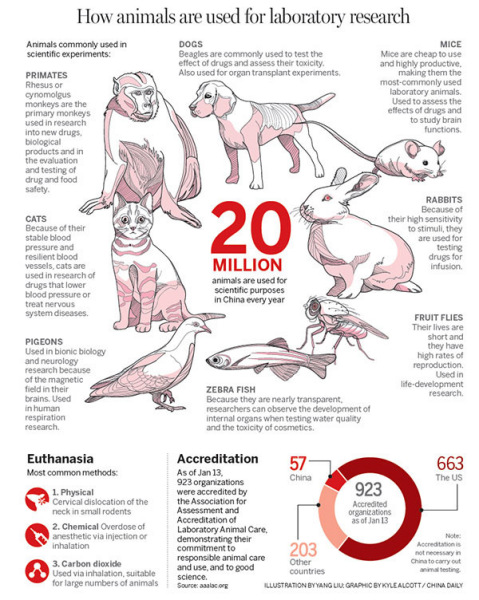