Amur tigers come back from the brink 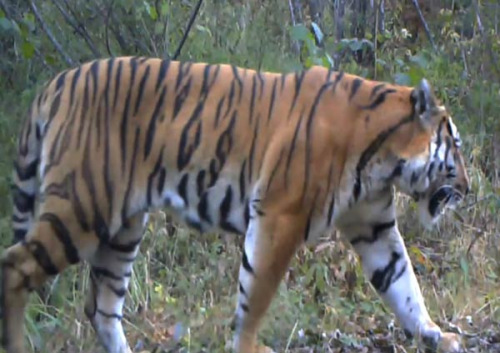 A wild tiger captured on a hi-resolution camera on Dec 18, 2013, in Harbin, the capital of Heilongjiang province. (Photo/Xinhua)

The population of the endangered big cats is rising again in Northeast China, as the animals travel south for prey. Su Zhou reports from Suiyang county, in Heilongjiang.

As a forest ranger in Heilongjiang province, he has spent the last six years patrolling the protection zones for big cats, removing poachers' traps and checking on the monitoring cameras.

"Once, after I collected a memory card from a camera, I checked the footage and discovered a tiger had passed by just a minute before I arrived," said the 35-year-old. "If I'd have been just a few moments earlier, I'd have come face to face with it."

Despite not seeing one in the flesh, Li has developed an attachment to the big cats through photographs and videos. "I miss them if I don't see them on camera for a while. I think about where they go, or if it snows, about whether they have enough food."

Li, who patrols his native Dongning county, is among the many villagers of Heilongjiang and Jilin - two provinces in Northeast China with long traditions of hunting - who are devoted to protecting Siberian tigers, also known as Amur tigers. And their efforts appear to be paying off.

Wildlife studies show the endangered species, which all but disappeared from China for decades, is making a comeback in the northeast.

The Amur tiger is the largest cat living in the wild. Before the 1960s it was abundant in China's northeastern region, but by the 1990s it was estimated that fewer than 20 still remained in the wild.

That trend has been slowly reversing. According to the latest official data, the number in Jilin has now risen to 27, with 12 to 14 roaming the wilds of Heilongjiang. Combined, the population is roughly double that reported in 2010.

A study to evaluate the potential habitat in Northeast China discovered the area could accommodate up to about 130 Amur tigers. Experts from the World Wide Fund for Nature, the Wildlife Conservation Society, Northeast Normal University in Changchun, wildlife NGO KORA and the University of Montana contributed to the study, which ran from 2008 to 2010.

Shi Quanhua, senior manager of WWF China's Asian big cats program, said long-term monitoring had shown two major trends: First, the tigers have been moving from the China-Russia border to inner areas of northeastern China; and second, they are breeding.

"The first activity we monitored was about 50 kilometers from the border. Now the area covered by the tigers reaches to about 300 km from the border," she said, explaining that the expansion indicates the population is increasing, as each tiger claims its own territory.

In February, the WWF recovered video footage of an Amur tigress with two cubs 30 km from the Russian border. John Barker, Asian programs leader for the WWF, told The Guardian newspaper that the footage confirms the animals are not just coming in and out from Russia, and that signs indicate the big cats are breeding in China.

Shi echoed the opinion: "At the beginning, with our cameras we could see single tigers traveling between China and Russia. In the past two years, we monitored families of tigers."

New families have also been spotted in the Wangqing area of Jilin, Shi added.

Officials in Jilin and Heilongjiang have vowed to enhance the protection of tigers, leopards and the environment.