Astronauts receive thousands of letters from the public 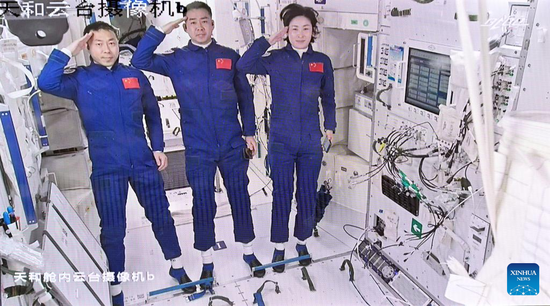 Chinese astronauts have received more than 30,000 letters from members of the public who wrote to share their stories, aspirations and wishes to crew members on board the Tiangong space station, according to People's Daily.

The newspaper said on Thursday that many of the letters were written by students across the country, and their words have been sent to the Shenzhou XIV crew now flying with the Tiangong.

The letters are results of a letter-soliciting activity held by People's Daily and the China Manned Space Agency starting in April.

Chen and his teammates entered the Tiangong station late on June 5, several hours after their Shenzhou XIV spacecraft was launched from the Jiuquan Satellite Launch Center in northwestern China. They are scheduled to stay in the massive orbiter for six months to monitor the assembly of the colossal station in space.

Shenzhou XIV is the sixth spacecraft to visit Tiangong and the third crewed ship to transport astronauts to the station.

The crew is now preparing for the arrival of the Wentian, the first lab component of the Tiangong.

Wentian is scheduled to be lifted soon by a Long March 5B rocket from the Wenchang Space Launch Center in Hainan province.

In October, the second lab, Mengtian, will be launched by the same rocket model from Wenchang. After the labs are connected with the Tiangong, the station will form a T-shaped structure.