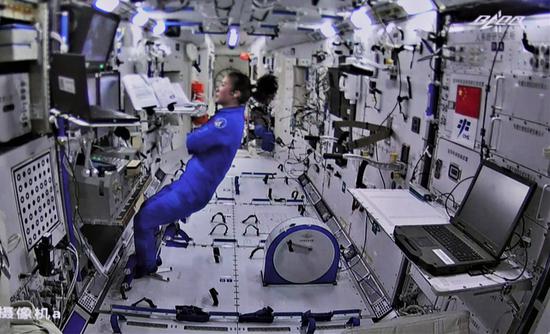 Wang Yaping has set a new record again for the most cumulative days living and working in space by a Chinese taikonaut.

She and two other male crew members Zhai Zhigang and Ye Guangfu were sent into China's space station core module Tianhe aboard the Shenzhou-13 spaceship on October 16, 2021 for a six-month stay -- the longest-ever duration in the country's manned space program.

The three-member crew is more than halfway through the trek. This is Wang's second trip into space, following her first 15-day Shenzhou-10 mission in June 2013, during which she earned the title of "space teacher" because of her televised science lecture to an audience consisting of over 60 million schoolchildren.

She has completed multiple tasks over the past three months, including performing a 6.5-hour long spacewalk, a live science lecture and a manual rendezvous and docking test with the Tianzhou-2 cargo vessel.

However, it has not been all about the experiments and construction of the country's space station for Wang and her teammates. They are also maintaining a decent work-life balance in orbit.

The China Manned Space Agency has released more video updates from space, showing that the three taikonauts have been devoting time to fitness to reduce the impact of long-term microgravity exposure on the body.

Wang was seen jogging on a treadmill while watching TV shows. Commander Zhai was practising a set of tai chi moves, and Ye was spotted playing a sliding block puzzle named Huarong Pass for relaxation.

Apart from workouts, recent videos also captured how the trio celebrated the New Year Day in orbit -- getting haircuts, decorating the core module with children's paintings and bringing their heads together to create a three-pointed star pose with their bodies.

These videos were received with much enthusiasm after the space agency shared them on social media platforms. In the latest update, the taikonauts were seen undergoing acupuncture, a traditional Chinese medical treatment, in zero gravity, which has drawn nearly 1.6 million hits since it was posted on the Chinese microblogging site Sina Weibo on Tuesday.

In a few days, the Shenzhou-13 crew will celebrate the Chinese Lunar New Year, the country's most important festival, in space. Wang said in an interview before the mission that she would carry a large musical instrument to play in the core module, and more gifts brought from Earth will be unveiled at that time.

"We are counting down to the New Year and extend our best wishes to the motherland and to all of you," Wang said.