Military ready to respond to any provocation 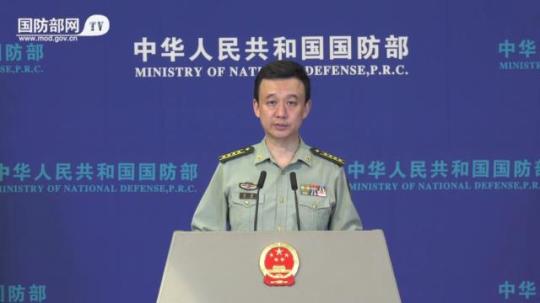 The Chinese military is sufficiently prepared to handle any foreign provocation or emergency during the 2022 Beijing Winter Olympic Games, the Ministry of National Defense said on Thursday.

In the middle of this month, the United States Navy announced that the nuclear submarine USS Nevada had recently arrived at the U.S. naval base in Guam, making it the second announced visit of a ballistic missile submarine to the island since the 1980s.

Several of the U.S. Navy's aircraft carrier battle groups have also recently conducted military drills around China, prompting analysts to speculate that the U.S. may also hold joint exercises with its allies in the region during the Games.

In response to the recent military drills, Senior Colonel Wu Qian, a ministry spokesman, told a news briefing that the Chinese military is sufficiently prepared to handle any foreign provocation or emergency.

In April, the U.S. naval vessel tracked the Chinese aircraft carrier in the South China Sea and took photos of their close encounter, prompting Chinese naval vessels to warn and repel the U.S. ship, the Ministry of National Defense said.

"What is surprising, however, is that the U.S. not only felt no shame at such military provocation, but was actually proud of its action," Wu said.

The U.S. and Japan are also planning deeper involvement in the Taiwan question, which Wu called a "dangerous move".

Wu said the two countries are blatantly interfering in China's domestic affairs and fabricating information to smear China. The Chinese military has expressed its strong dissatisfaction and opposition, he added.

Taiwan is a part of China, and the Taiwan question is a purely domestic matter that leaves no room for foreign interference, Wu said. The root cause for the rising tension in the Taiwan Straits is constant provocation by the island's pro-secession party and Taiwan separatist forces, he added.

U.S. and Japanese involvement in the Taiwan question sends the wrong signal to separatist forces and emboldens their agenda. "This is the biggest threat to peace and stability in the Taiwan Straits," he said.

Wu said the deeper the U.S. and Japan try to get involved, the harsher the consequences they will face.

Wu also urged the U.S. to work with China to jointly safeguard global stability, after all five permanent members of the United Nations Security Council signed a pledge early this month to reduce the risk of nuclear war. However, the U.S. has recently focused on what it claims is an increased nuclear threat from China.

China is party to more than 20 international arms control agreements and mechanisms, and has been an active contributor to related affairs, Wu said. China also adamantly upholds a nuclear strategy that is defensive in nature, and will not be the first party to use nuclear weapons under any circumstances, nor would it use such weapons against countries without a nuclear arsenal.

Wu said that China has maintained its nuclear armory at the lowest level required for national security, and will not compete with others in the investment, number and size of nuclear weapons.

On the other hand, the U.S., with its pursuit of absolute military advantage and security, has abandoned numerous arms control treaties in recent years, causing serious negative effects to the international arms control system, Wu said.

The U.S. is also promoting the use and spread of nuclear weapons by collaborating with Australia and the United Kingdom on nuclear submarine technology and investing heavily in modernizing its nuclear arsenal, which is already the largest in the world, he added.

"Reality has shown that the U.S. is the biggest source of risk in international security," Wu said.