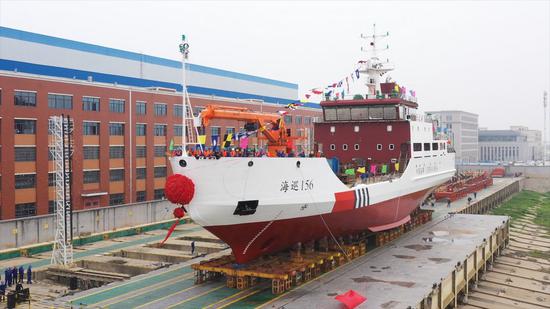 A seagoing buoy tender with an ice-breaking function, the first of its kind in China, on Thursday tested water in Wuhan, capital of central China's Hubei Province.

The Haixun 156, or Sea Patrol 156, has a displacement of 2,400 tonnes with a length of 74.9 meters and a width of 14.3 meters, according to its shipbuilder Wuchang Shipbuilding Industry Group Co., Ltd., an affiliate of China State Shipbuilding Corporation Ltd.

The electric vessel can break through ice as thick as 0.5 meters at a speed of 5 knots.

It is designed for setting up, removing, swapping and maintaining navigation aid facilities at icy ports and on navigation routes in north China, where sea ice disasters often occur.

The shipbuilding started in April 2019, and the vessel is expected to start service for Tianjin-based Northern Navigation Service Center in September this year.