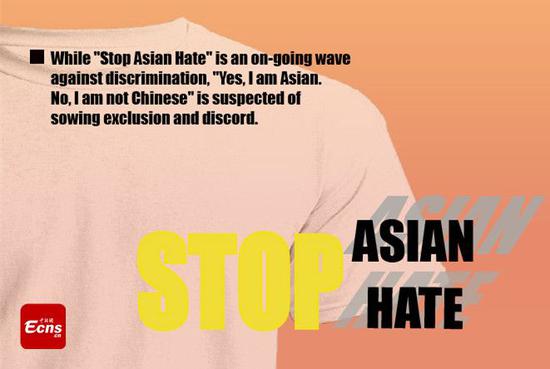 While "Stop Asian Hate" is an on-going wave against discrimination, "Yes, I am Asian. No, I am not Chinese" is suspected of sowing exclusion and discord. (Pic by Yao Lan)

(ECNS) -- With massive protests against Anti-Asian hatred in full swing, people are calling out Redbubble, a Melbourne-based print-on-demand fashion and art company, for promoting products exclusive of Chinese.

While "Stop Asian Hate" is an on-going wave against discrimination, "Yes, I am Asian. No, I am not Chinese" is suspected of sowing exclusion and discord.

It is not the first time Redbubble has created violent or vulgar slogans. It sold "Hipster Hitler" T-shirts in 2011 and was soon boycotted by the Australian Jewish community.

Similar T-shirts with slogans like "I'm from Japan, not China" or "I'm from Korea, not China" were also sold on Amazon, though they were soon removed after complaints.

These slogans have obvious connotations. They are isolating Chinese-Americans in a time when it is imperative for all Asian-Americans to stand together.

"Yes, I am Asian. No, I am not Chinese" also puts double pressure on Chinese Americans amid increasing cases of anti-Asian hatred. Chinese-Americans must tolerate discrimination from white supremacy as well as exclusion from Asian ethnic groups.

When the world calls for zero tolerance of racism and anti-Asian hatred, provoking dissension among Asians only peddles discrimination and fuels racial hatred.

A racist won't care where someone comes from and will attack anyone who looks Asian, said German Sinologist Kimiko Suda in March.

When the fire of hatred spreads, nobody will be spared, whether you are Korean-American or Japanese-American.

In a hatred-fueled society, any innocent individual is likely to become a target.

When confronted with racism toward anyone, our instinct should be indignation, not deflection, Korean-American writer Euny Hong wrote in The New York Times in 2020.