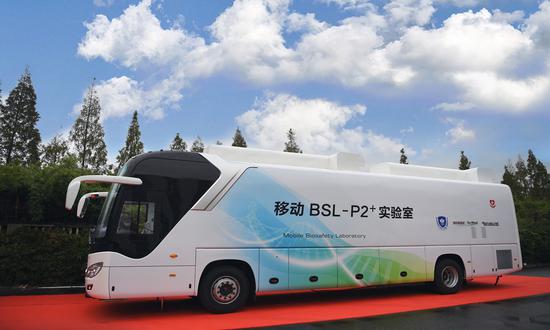 A Chinese-made biosafety level-II plus mobile nucleic acid testing laboratory vehicle was officially put into use in Shanghai on Monday to support the upcoming third China International Import Expo (CIIE).

The mobile biosafety laboratory — which took 108 days to develop — has the capability to detect the nucleic acid and antibodies of pathogenic microorganisms such as the novel coronavirus, according to the Shanghai Academy of Experimental Medicine.

It can support on-demand inspection flexibly at multiple locations including airports, stations, border ports and schools, a staff member from Shanghai Academy of Experimental Medicine, the major developer, told the Global Times on Monday, noting that its appearance marks its debut soon after its development.

The lab can provide real-time transmission of detection data to improve response speeds and disposal capabilities, supporting the CIIE develop smoothly amid normalized epidemic prevention and control measures, according to the Shanghai Health Commission.

At the same time, intelligent information systems and 5G technology applications can be applied to transmit data to the relevant departments in a timely manner to support epidemic prevention.