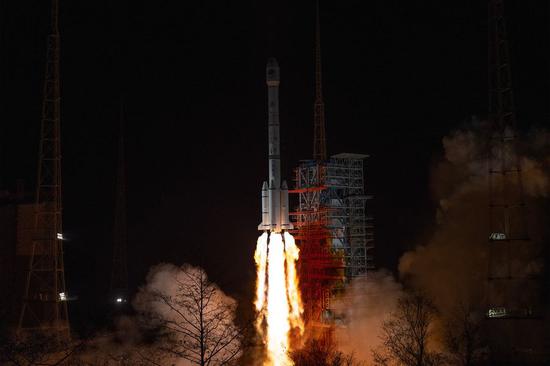 China launches a new satellite of the BeiDou Navigation Satellite System (BDS) from the Xichang Satellite Launch Center in southwest China's Sichuan Province, March 9, 2020, only one step away from completing the whole global system. (Photo by Guo Wenbin/Xinhua)

The Xi'an Satellite Control Center's tests have shown links among the satellites of the BeiDou Navigation Satellite System (BDS) are stable to ensure that the constellation can be completed as scheduled.

The tests showed that the inter-satellite links meet the demands of the construction of the global system, said Yuan Yong, a senior engineer from the control center.

He said that the tests, lasting for more than two years, covered 29 satellites of the BDS-3 system.

Since the ground stations in China cannot continuously track and control all the BDS satellites, the inter-satellite links help establish communication among them. Instructions sent by the control center to one satellite in the constellation is transmitted to all.

China began to develop its navigation system, named after the Chinese term for the Big Dipper constellation, in the 1990s and started serving the Asia-Pacific Region in 2012.

Currently, all the first generation BDS-1 satellites have ended operations, and a total of 54 BDS-2 and BDS-3 satellites have been sent to space. The BDS-3 system will consist of 30 satellites.

China aims to launch the last BDS-3 satellite in June to complete the construction of the constellation and provide high-precision and reliable positioning, navigation and timing services around the world.