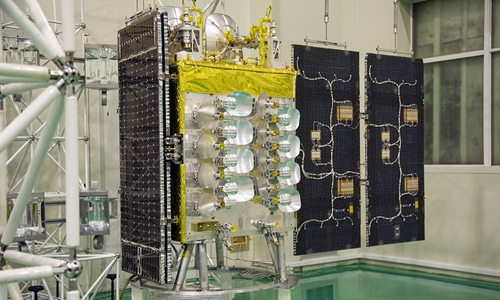 A view of low-Earth 5G broadband satellite made by Galaxy Space in December. (Photo/Courtesy of Galaxy Space)

The satellite, developed by domestic commercial aerospace company Galaxy Space, is the first in China with data transmission capacity of 10 gigabits per second. It's also the world's first LEO broadband satellite in the Q/V band, an extremely high-frequency band, according to the company.

The satellite will be able to cover an area of 300,000 square kilometers, roughly 50 times the size of Shanghai, the company said.

Lei Jun, CEO and chairman of China's technology giant Xiaomi, praised the launch on his WeChat account on Thursday. Shunwei Capital, the venture capital firm established by Lei, has invested in four start-ups in the private commercial space sector, including Galaxy Space.

"The commercial space sector, featuring innovation, high technology and civil-military fusion, is the path that nation must take to shift from a big space country to a strong one," said Lei.

"Our loading technology in the Q/V band is the 'killer app' in catching up with foreign rivals," Xu Ming, CEO of Galaxy Space, told the Global Times. Xu noted that the company's ambition is to compete head-on with leading foreign players such as OneWeb and SpaceX.

The 5G satellite was launched via the Kuaizhou-1A rocket, a low-cost solid-fuel carrier rocket with high reliability and a short preparation period, developed by a company under the China Aerospace Science and Industry Corp.

In December, two solid-fueled Kuaizhou-1A rockets were fired into orbit from the same spaceport in northern China with a gap of less than six hours.

Cao Meng, head of marketing of the Kuaizhou team, told the Global Times on Thursday that the rocket, mainly used to launch LEO microsatellites, will send more test satellites into space this year.