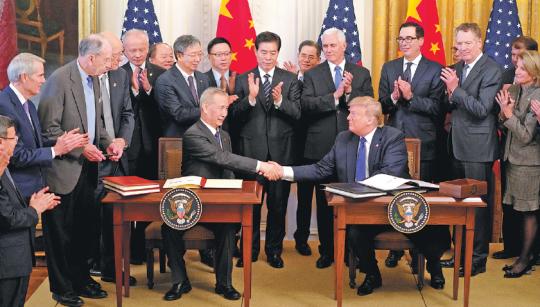 The signing of the China-U.S. phase-one trade pact, which has both economic and political significance, will bolster the world economy, while the top priority is ensuring its efficient implementation, officials and analysts said.

Vice-Premier Liu He said the China-U.S. phase-one economic and trade agreement bears economic and political significance and addresses the key concerns of both sides.

The deal has injected positive energy into the stability and development of the world economy, Liu said on Wednesday after signing the pact with U.S. President Donald Trump in the White House.

As the world's two largest economies and two major countries with great responsibilities in international affairs, China and the United States have reached the deal "with the big picture in mind", Liu said at a briefing with Chinese media after the deal was signed.

In a message delivered at the deal-signing ceremony, President Xi Jinping said the conclusion of the phase-one economic and trade agreement is good for China, the U.S. and the entire world.

"It also shows that our two countries have the ability to act on the basis of equality and mutual respect, and work through dialogue and consultation to properly handle and effectively resolve relevant issues," he said in the message.

In the next step, the two sides need to implement the agreement in earnest and optimize its positive impact, in order to make even greater progress in China-U.S. trade and economic cooperation, Xi said.

Foreign Ministry spokesman Geng Shuang said it is imperative for China and the U.S. to work together, adhere to the principles of equality and mutual respect and strictly abide by the agreement.

Both sides need to take care of each other's core concerns and strive to implement the first phase of the agreement, which is important for the future development of China-U.S. economic and trade relations, Geng said.

Wei Jianguo, vice-president of the China Center for International Economic Exchanges, said: "The deal signing itself means much more than the content. It shows that China and the U.S. — two countries with different political, economic systems and in different stages of development — are able to find a solution when conflicts occur."

"The resolution of the nearly two-year China-U.S. tensions also set a good example for other countries to solve their potential disputes," Wei said.

There is still a "long way to go" for the two countries to further improve their economic and trade relations, Wei added, noting the top priority should be effective implementation of the deal.

Derek Chan, president of the North China Committee of professional accounting organization CPA Australia, said the conclusion of the initial accord will help strengthen confidence in global trade and investment.

A stable economic growth rate of around 6 percent in 2020 and high-quality growth driven by investment in emerging technologies will see China remain a key driver of growth, Chan said.

China's gross domestic product is estimated to expand over 6 percent in 2019, and the January data also points to a better-than-expected economic outlook, Vice-Premier Liu said on Wednesday.