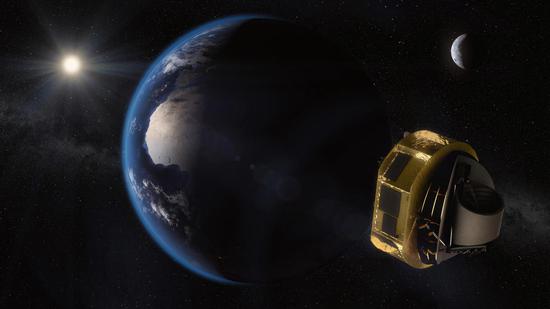 An artist's concept of the European Space Agency's ARIEL spacecraft on its way to Lagrange Point 2 (L2) - a gravitationally stable, Sun-centric orbit - where it will be shielded from the Sun and have a clear view of the sky. /NASA Photo

The U.S. space agency NASA is planning to attach an instrument to a European spacecraft that will explore the exoplanets' clouds for the first time.

The ARIEL spacecraft, developed by the European Space Agency, is expected to launch in 2028, according to NASA.

"The more information we have about exoplanets, the closer we get to understanding the origins of our solar system, and advancing our search for Earth-like planets elsewhere," said Thomas Zurbuchen, associate administrator for NASA's Science Mission Directorate.

So far, scientists have found more than 4,000 confirmed exoplanets in the Milky Way. ARIEL will be able to see the chemical fingerprints of an exoplanet's atmosphere in the light of its star.

Those fingerprints will allow scientists to study the compositions, temperatures and chemical processes in the atmospheres of the planets ARIEL observes.

The CASE instrument, which is sensitive to light at near-infrared wavelengths and visible light, will specifically look at exoplanets' clouds and hazes and also each planet's albedo, the amount of light the planet reflects.

The spacecraft with CASE onboard will focus on hot exoplanets in our galaxy, including gas giants like Jupiter, smaller gaseous planets called mini-Neptunes and rocky worlds bigger than our planet called super-Earths.

Although those planets are too hot to host life, they will tell a lot about how planets and planetary systems form and evolve.

Also, the techniques used by ARIEL and CASE will be useful when scientists use future telescopes to look toward smaller, colder, rockier worlds with conditions that more closely resemble Earth's.