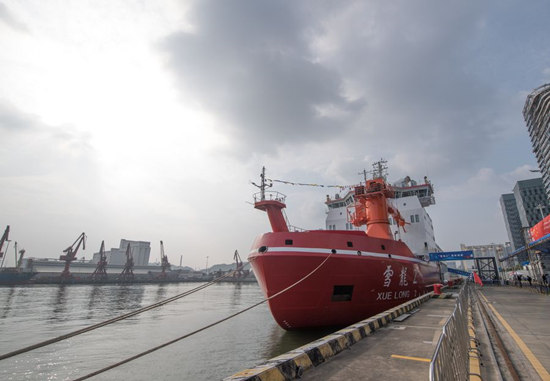 China's first domestically made polar icebreaker Xuelong 2, or Snow Dragon 2, will start its maiden voyage to the Antarctic from the southern Chinese city of Shenzhen Tuesday.

Xuelong 2 will set sail on the country's 36th Antarctic expedition, which will have a 413-member team aiming to grasp the influence of Antarctic changes on the world, improve China's ability to cope with climate change and increase participation in Antarctic global governance, said Qin Weijia, director of the Chinese Arctic and Antarctic Administration, at a press conference held in Shenzhen, south China's Guangdong Province.

Another icebreaker named Xuelong will also join the expedition, making it the first time that two polar icebreakers work together on China's Antarctic expedition.

Xuelong 2 will sail to the Zhongshan Station before conducting research in the Cosmonauts Sea and China's Great Wall Station. It is expected to return in late March 2020.

The icebreaker Xuelong will set sail from Shanghai on Oct. 22 to Zhongshan Station and then conduct a series of surveys and engineering projects in the Ross Sea and Amundsen Sea. It is expected to return in mid-April 2020.

The expedition will conduct multidisciplinary observations on the sea, atmosphere, ice shelf and biology. It will also conduct preliminary construction work of China's fifth research station on Inexpressible Island.