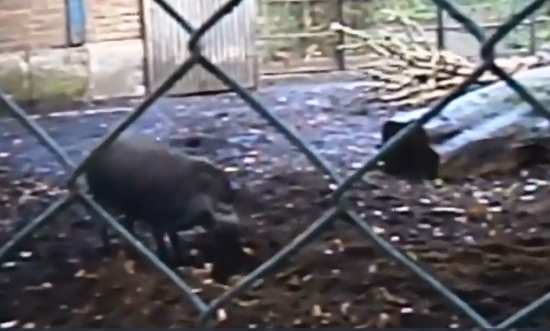 A critically endangered specie of the pig genus has been spotted using bark and sticks for building their nests, according to a study published in the journal Mammalian Biology.

A Visayan warty pig, named Priscilla, was caught on camera at a Parisian zoo. The pig used a stick as a tool to lift and push the soil backwards around its nest.

"She would deposit some leaves, move them to a different spot on the mound, and dig a bit with her nose," study's co-author Meredith Root-Bernstein wrote in her observations revealed to CNN.

"At one point she picked up a flat piece of bark about 10 cm x 40 cm that was lying on that mound, and holding it in her mouth, used it to dig, quite energetically and rapidly," she added.

Primates like chimpanzees, orangutans and gorillas are known to have the ability of making and using tools long ago without human help. Wild species from crows to dolphins have also been reported to use tools for handling food. A widely known story in our childhood was how a thirsty crow dropped stones in the pitcher to raise the water level.

"But there were no scientific reports on tool use in any kinds of pigs," said Meredith. "The finding will shed light on how the cognition evolves and how bodies are linked to their environments."