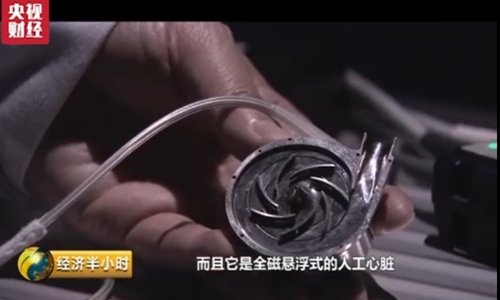 A screenshot of the "Chinese heart" (Photo/China Central Television

Dubbed the "Chinese heart," China's independently developed magnetic levitation (maglev) heart has helped seven patients suffering from heart failure to return to a  normal life, and is giving new hope to millions of Chinese who suffer from the same disease.

The "Chinese heart" has surpassed foreign made ones in many aspects like size and blood adaptability.

The device - a third-generation artificial heart made in China - is only 26 millimeters thick and 50 millimeters in diameter, weighing less than 180 grams.

Such a small size was made possible by reducing the power and volume requirement of the magnets used in the hearts, China Central Television (CCTV)reported on Thursday.

It takes time for the blood to recognize the artificial heart as foreign matter, but the heart is designed to let the blood pass within 0.1 second, so there would be no rejection, according to CCTV.

The device is so small that it can be directly attached to a patient's malfunctioning heart, and this is why there is a much lower risk of rejection, the director of the department of cardiology, surnamed Ji, at a hospital in Taiyuan, North China's Shanxi Province, told the Global Times on Sunday.

Instead of mechanical bearings used previously in artificial hearts, maglev hearts use magnetic force to make the rotors float, which drives a blood pump in the device. This minimizes friction and maximizes its lifespan, Chen Chen, the leader of the heart's development team, was  quoted as saying by media.

The new heart has solved the problem of incompatibility between artificial hearts and blood type, which could cause clots to form, the report said.

Experts hailed the achievement and look forward to its wide clinical use, noting that prices will be lower than similar imported devices.

Currently, there are some 10 million people in China diagnosed with heart failure, but on average, every year only 300 can have a heart transplant. Many rely on artificial hearts, CCTV said.

But he added that the government has not yet approved the device for commercial use.

"When it can be used, it will definitely benefit patients with heart diseases in China."

He Xin, 29, from Tangshan, North China's Hebei Province, was the first to benefit from the maglev heart.

He would feel weak, finding it difficult to breathe after a walk of only 20-30 meters, but after he received his maglev heart two months ago, he can walk more than a kilometer and climb stairs easily, he told CCTV.

The maglev heart will allow patients to play sports like golf and enjoy lives of high quality, CCTV said.